Is there a theory/abstraction behind OOP?

Functional programming has the very elegant Lambda Calculus and its variants as a backup theory. Is there such a thing for OOP? What is an abstraction for the object oriented model?

There are four main approaches, though these only scratch the surface of what is available:

The connection between object model core and set theory is described in the following documents:

The documents present the structure of instance and inheritance relations between objects. Such a structure can be considered the highest possible abstraction of OOP. It is shown how the structure applies to particular programming languages (Ruby, Python, Java, Scala, Smalltalk-80, Objective-C, CLOS, Perl, Dylan, JavaScript) and also to ontology languages (RDF Schema and OWL 2 Full).

In the documents, the classes are objects approach is taken so that the core structure is single-sorted. In the main form, the structure can be expressed as (O, ϵ, ≤, .ec) where

A sample core structure according to the Ruby object model is shown by the following diagram. Green links show the inheritance relation in the reflexive transitive reduction, blue links show the membership relation in the "subsumption reduction" – a blue link from x points to the least container of x. The powerclass map .ec is formed by horizontal blue links. Objects from the image of this map are powerclasses (in gray). In Ruby they are called eigenclasses or also singleton classes (the latter term being rather deprecated). Objects s, u and v (in pink) are terminal, the remaining objects are descendants of the inheritance root r. 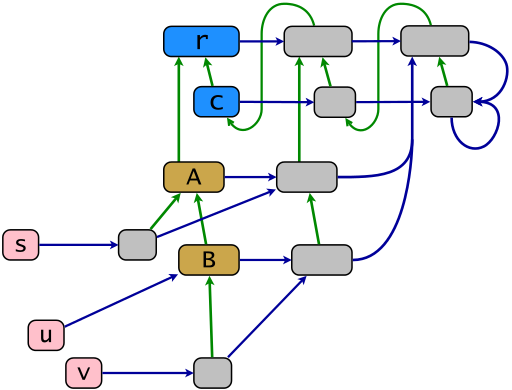 Core parts of the object model of all the above languages can be seen as specializations of the structure, with no or just a few additional constituents. From the theoretical point of view, the most significant case of an additional constituent is the singleton map (denoted .ɛϲ) introduced by Dylan. This makes Dylan the only programming language (from the above mentioned) thas is not subject to the monotonicity condition (≤) ○ (ϵ) ⊆ (ϵ) where the composition symbol ○ is interpreted left-to-right.

One way to formalize the connection between object model core and set theory is via the family of structures (O, ≤, r, .ec, .ɛϲ) called metaobject structures in the referenced documents since x.ec or x.ɛϲ can be considered as metaobjects of x. In these structures x.ec is defined for every object x and x.ɛϲ is defined for every bounded ("small") object x. The structures are subject to the nine axioms below. The axiomatization uses a definitional extension which is quite simple for the first eight axioms (T denotes the set of terminal objects – those which are not descendants of r, and .ec∗ is the reflexive transitive closure of .ec) but rather involved for the last axiom.

In the last axiom, ϖ is a fixed limit ordinal, and .d is the rank function derived by the definitional extension. The object membership relation, ϵ, is obtained as ((.ɛϲ) ∪ (.ec)) ○ (≤). According to the last axiom, the domain-restriction of ϵ to the set of bounded objects equals (.ɛϲ) ○ (≤). In the referenced documents, this relation is called bounded membership and denoted ∊. As a significant characteristics, this relation is well-founded. This is in contrast to ϵ which is non-well-founded since r ϵ r. It turns out that the main correspondence between (the core part of) object technology and set theory can be expressed as

Not the answer you're looking for? Browse other questions tagged terminology lambda-calculus functional-programming object-oriented or ask your own question.

11
Is there an equivalent of lambda calculus for object oriented languages?