Equality testing of arrays and integers in a procedural language

In terms of references and their implementation on the heap and the stack, how is equality testing for arrays different from that for integers?

This is to do with Java programming, if you have a stack and a heap, would equality testing for example j == i be the same for arrays and for integers? I understand that arrays, are stored in the heap and the stack, as it holds bulks of data, but integers are only stored in the stack and referenced in the heap. 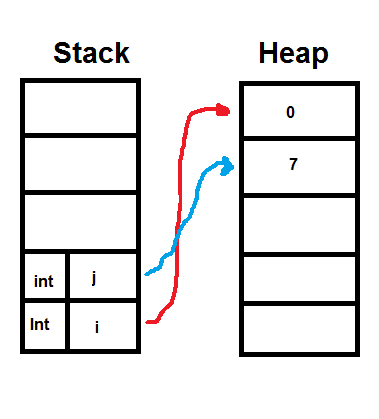 I understand for equality testing j==i (variables) the stack pointer will point to the same location.

I'm confused on how j==i would be different for array and integers.

Integers are stored in one word of memory and there is a primitive machine code instruction for testing their equality. Most programming languages lift this instruction to the syntax, as with i == j in Java (where i and j are of type int).

The idea of "stack" and "heap" is incoherent in my view. It is best not to think in those terms.

The real difference is between

In Java, when you declare an integer variable:

you are creating a named location. An integer such as 23, say, will be stored in that location. Note that only one location is created!

On the other hand, when you declare an integer array:

I think of Java as an extremely confusing language from this point of view. The declarations int i; and int a[10]; look so similar, but what they mean is entirely different!

Coming back to the question, when you compare two integer variables using i == j", you are asking "are the integers stored in the two named locations the same?". When you compare two array variables using a == b, you are asking the question "are the references stored in the two named locations a and b the same?" If a and b store references to two different blocks of locations both of which might contain the same integers, the comparison a == b would still come out false. Why? The comparison a == b doesn't look at the actual blocks of locations at all. It just checks to see whether they are the same block. This kind of thing is often called reference equality or shallow equality.

It is not really your fault if you are totally confused. When hackers design programming languages, this is the kind of mess they create!

Not the answer you're looking for? Browse other questions tagged programming-languages arrays semantics equality memory-management or ask your own question.

18
Problems Implementing Closures in Non-functional Settings
1
How are variables accessed in the correct order from the stack?
9
When used as call stack, do garbage-free spaghetti stacks form a DAG?
8
What would a language look like in which precise GC was implementable as a library?
48
How are variables stored in and retrieved from the program stack?
0
Advantage of Stack-Based Allocation for Local Variables