How to convert a Turing Machine program to a tiling using Wang Tiles?

This is a cross-post from a post on MathSE due to lack of answers.

To illustrate my question I provide the following example.

A program line has the following format:

In the program above q0 is the initial state and q3 is the accepting state.

In Tilings and Patterns by Gruenbaum and Shephard, 11.4 "Computing By Tiles" I read that it is possible to convert any turing machine program to a tiling of the plane using Wang tiles. The book contains an example tiling which calculates the Fibonacci numbers. The procedure, recipe, to convert a Turing machine program to a set of Wang tiles is not entirely clear to me.

Question: What is the algorithm to convert a Turing Machine program line by line to a set of tiling of the plane using Wang Tiles? And how does it work on the Turing machine in the given example? 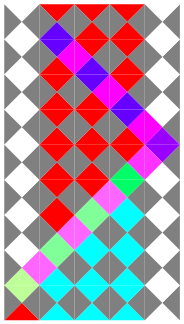 (partial answer) via wikipedia, the conversion/reduction of TMs to Wang tiling was 1st proven in this paper, & there are possibly later simplifications:

Not the answer you're looking for? Browse other questions tagged turing-machines simulation computation-models tiling or ask your own question.