More than one NFA accepting a given language

While going through certain problems. it seems that more than one NFA is possible for the given language. Is it so? 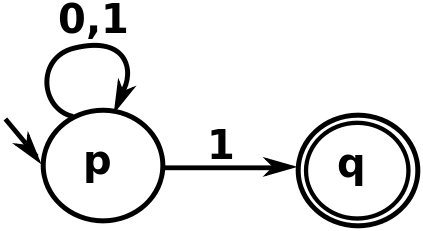 and also we can draw one without 0 from the edge P to P!

Which one should be considered "more" correct?

There are many, many different NFAs accepting a particular language, or DFAs for that matter. You can just add branches that lead into dead ends at will, for example. Or add detours that give the same result as the main road, like in your automaton adding a new state $r$, with transitions from $p$ to $r$ on 1, and then from $r$ to $r$ on 0 and 1, and finally from $r$ to $q$ on 1.

In the given case, omitting the transition from $p$ to $p$ on 0 gives another language. You should convince yourself that the modified NFA doesn't accept anything containing zeros.

There is no notion of "more correct" so your inverted commas around "more" are well placed. An analogous question would be something like, "There are many different ways of writing a given program – which is 'most' correct?"

In theoretical terms, any automaton that accepts a language is as good as any other. The existence of an automaton means the language is regular; non-existence means it isn't.

In practical terms, there may be a preference for the automaton with the least number of states, since that requires less memory to implement.

For teaching purposes, there may be a preference for automata with simple structure and states whose "function" is easily described. For example, suppose you're asked to produce an automaton for $(a+b)^*(ab)^+$. It's much easier to describe the three-state nondeterministic automaton that "guesses" when the $(a+b)^*$ part of the string ends and then checks that the rest of the string matches $(ab)^+$ than it is to describe the corresponding deterministic automaton.