A scoring approach to computer opponents that needs balancing

This question is about an approach to computer opponents that I have created and are either currently being used, or are planned to be used, in several computer games.

Last year, when trying to improve a computer opponent for a game called "Minesweeper Flags" (short description: A turn-based multiplayer version of Minesweeper where you have to take more mines than your opponent), I strongly changed the way my algorithms worked. Instead of using an approach like if-else-if-else, I am using a set of "scorers" with specified weights to determine what the best move is.

You might think that for a game like Minesweeper Flags, it's only about making moves that gives you the highest probability of taking a mine, but it's not that simple. Which move the computer will make usually depends on several features for that specific move in the current game state. Examples of features:

Description of the system

When combining a bunch of pre-scorers, scorers (with their weights) and post-scorers, it's becomes what I call a score configuration.

This is an example of scores having been applied to Minesweeper Flags. This is the map that was scored: 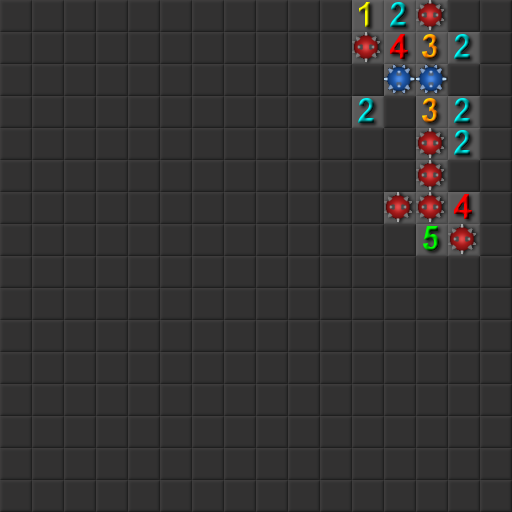 And this is the output of an actual score configuration. It is showing the rank of the possible moves, where 1 is the best rank and has been highlighted in white: 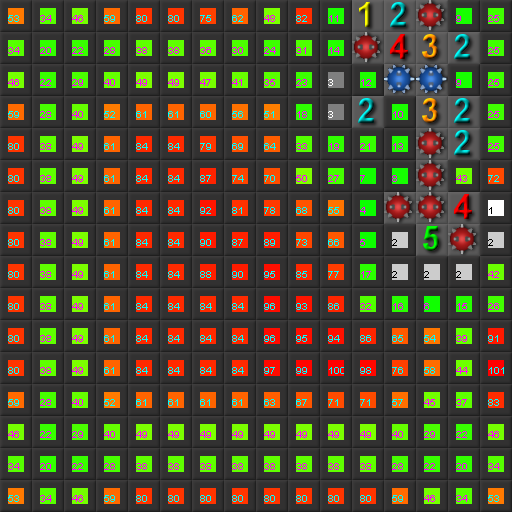 Thanks to having written highly flexible code, this approach to AIs can be inserted into other games as well.

Regarding the last question, I am aware of the possibility of using genetic algorithms, I am also mildly aware of SARSA (and I do think my scorers resembles that site's description of features with weights, but from my understanding that's not exactly what I have created here). I think that a problem with SARSA is that you don't know the reward until the game is over, the best move is often a move which doesn't give a reward (a mine) at all. Your current chances of winning depends on both the current score (how many mines you and your opponent have taken) and what the current map looks like.

This question was originally posted on a now defunct Artificial Intelligence site.
The (Java) code used for this approach has now been posted at Code Review.

At a stretch it is an expert system (such as fuzzy logic). As you are not running an algorithm to perform feedback onto the decision parameters based on the output, it's not really learning. However, performing feedback is not the only indicator whether an alogirthm is AI. One could argue that if it acts in a way that appears intelligent, that's all that matters - especially when the game is played by a human opponent.

The kind of algorithm you've specified is really a parameterised equation, the kind you'll find in insurance calculations. After each move, the input space changes but the algorithm needs no memory of the previous state, so it treats each move as a new, separate board.

There are two clear options for genetic algorithms:

On making it too good

I know you want the algorithm to be the best it can be but don't forget that a human is playing against it. There is a tactically perfect way to play these sorts of deterministic games and if the AI player takes it, it would only purely luck that meant that the player wins.

Yes, the technique of assigning scores based on certain aspects of the position is standard in writing AIs to play games. For example, almost all chess programs work by scoring positions based most significantly on the pieces available, with smaller bonuses based on their positions (e.g., pawns protecting each other). They then try to calculate the best available move by using an adversarial search algorithm such as alpha-beta.

Adversarial search might be difficult here because of the large branching factor -- in any position, the legal moves are to mark or reveal any unknown square. On the other hand, it's possible that you can cut down the branching factor a lot by heuristics. For example, marking or revealing a square you know nothing at all about is very rarely going to be the best move. Conversely, if you know the locations of some unmarked mines, marking one of them will presumably be the best move, most of the time. Maintaining a transposition table would also probably help.

Not the answer you're looking for? Browse other questions tagged algorithms artificial-intelligence computer-games or ask your own question.

7
Alpha-Beta Pruning with simultaneous moves?
15
Can there be a perfect chess algorithm?
3
Can Real-Time Strategy games be ever solved?
5
Algorithms to play randomized game
1
Dynamic subtraction game
1
Representation of 8-Puzzle for (A*) Search Algorithm in C
3
Effective AI for one player-one ghost pacman
1
Do Nested Monte Carlo Algorithm always find the best score where score is the number of moves on the leftmost path
1
Pandemic board game - find all possible next 4 actions