In section 6.3 of the paper Causal memory: definitions, implementations, and programming, the authors define "data-race free" as follows:

The one-sentence definition is too complicated for me to follow. It involves various notions and their relations. Specifically, a program is a set of its histories. Given a history, there may be more than one causality order for it, because there may be multiple writes of a value to a variable and thus more than one writes-into order. Let $H$ be a history with causality order $\leadsto$. We have to consider whether it is sequentially consistent and data-race free with respect to $\leadsto$.

The following image enumerates all the possible classes of executions which I can think of produced by any program. The red crosses in the image indicate non-existence. For instance, the "path" $\Pi - H_1 - \leadsto_{12} - S_{12} - DRF_{12}$ means that $S_{12}$ is a serialization (thus sequentially consistent) of history $H_1$ that respects $\leadsto_{12}$ but is not data-race free with respect to $\leadsto_{12}$. 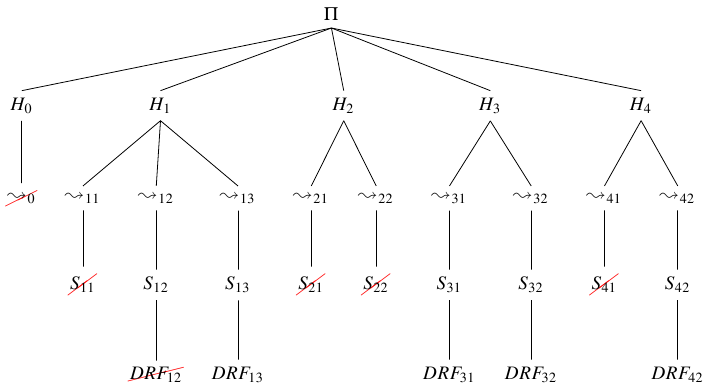 Theorem 5. If $\Pi$ is data-race free, then all histories of $\Pi$ with causal memory are sequentially consistent.

In the first paragraph of its proof, it says that "Let $H$ be a finite (infinite) causal history and let $\leadsto$ be a causality order that proves that $H$ is causal. We will prove that $H$ is data-race free with respect to $\leadsto$ and has a serialization that respects $\leadsto$".

Here come my other two problems:

(2). Back to the image above, does the theorem mean that when run on causal memory data-race free programs produce only the executions like $H_3$ which are both sequentially consistent and data-race free with respect to each of its causality orders?

(3). If so, is it right to conclude that the executions produced by data-race free programs when run on causal memory actually satisfy some stronger consistency model (though not formally defined) than sequentially consistent model?

Besides the answers to my problems, any personal (or even subjective) comments worthy of note on the definition "data-race free" are appreciated.

Browse other questions tagged terminology parallel-computing concurrency or ask your own question.