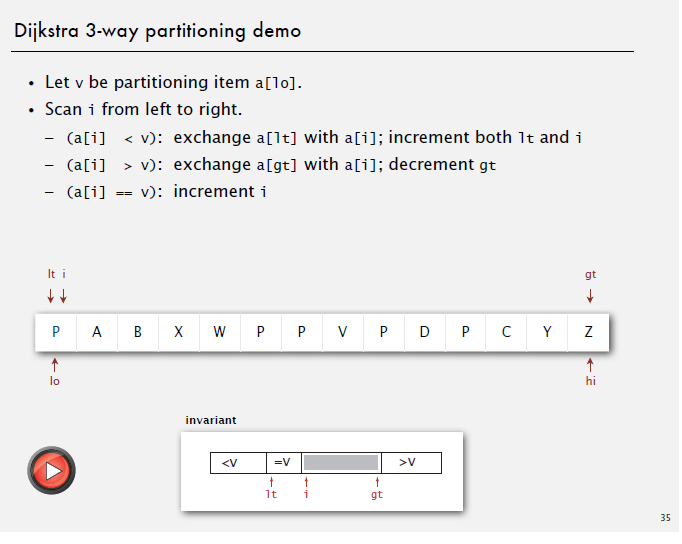 Given the algorithm above (taken from the slides (p. 35) of the Coursera course “Algorithms Part I” by Robert Sedgewick and Kevin Wayne), look at the scenario where i is at "X", the following happens:

Why don't we just decrement gt until gt points to a value that is < the value at lt ("P" in this case), then we swap this value with the value at i. This will save swapping operations.

So if we do that for the scenario mentioned above, we'll do:

P.S. "Affect performance" as used above means either improve/degrade performance.

In order to know that you may just decrement gt, you have to compare the element at position gt to the pivot.

If the element is larger, we save a swap, as you illustrated. Furthermore we won't have to compare that element again. If, however, the element is not larger, we will compare it to the pivot twice, once before the swap and once after the swap.

Averaging over all inputs we can expect the number of elements smaller resp. larger than the pivot to be equal. So the performance will depend on the number of elements equal to the pivot (and the cost of a swap vs. a comparison). Your modification will have the better relative performance, the smaller that number is. But 3-way partitioning was developed with inputs with many equal keys in mind, so the original choice seems reasonable.

Taking a second look at the modified algorithm, we note that if we compare an element twice, there is no other comparison happening between these two. So it seems worthwhile to remember the result of the comparison. However, if we want to keep the structure of the code, this means a lot of control structure overhead:

My gut feeling is that even though it combines the advantages of the previous two versions in terms of number of comparisons and swaps, it will perform worse due to the overhead of the additional control structures.

Not only have we introduced additional operations (checking conditions, maintaining the flag), we also introduced (compared to Dijkstra's version) two additional conditional jumps (for if and while), that will often but irregularly switch between taken and not taken. The latter is a problem on modern processors, since they rely on branch predictions for optimal performance and such branches will lead to a high number of mispredictions. (The branch corresponding to the outer loop is an opposite example: Always predicting that the loop will be entered is wrong only once.)

With these considerations in mind, we can try to optimize the code. The following should perform quite well:

So, summing up / answering your final questions explicitly:

Some Context and History

FrankW's post answers most of the question, but I can add some references and give some context to it.

First of all, the algorithm is named after Dijkstra because of his 1976 programming book “A Discipline of Programming”, wherein chapter 14 deals with the so-called “Dutch National Flag Problem (DNFP)”:

Rearrange an array of red, white and blue pebbles by swaps, such that their colors mimic the flag of the Netherlands.

The DNFP was intended as a programming exercise and is maybe not interesting per se.
What is often needed, however, is sorting an array, and this is often done using Quicksort (see this question if you are interested in why is quicksort better than other sorting algorithms in practice).

From flags to sorting

The crucial part in Quicksort is to partition an array around a pivot, i.e. rearrange the array to have small elements to the left, elements equal to the pivot in the middle and large elements to the right. — exactly like in the DNFP! Therefore, we can use the algorithms for the DNFP in the 3-way partitioning step for Quicksort.

Is this excessive swapping needed for the algorithm?

I suppose that Sedgewick used the version with the extra swap to keep the code concise — for educational reasons, so to say.

First of all, performance depends on the input, especially the length of the array; but also on the number of elements equal to the pivot and so on. To answer you question, you will have to fix an input model.

Secondly, it is not clear what exactly we mean by “performance” ...
If we are interested in total running time in seconds, then the answer will depend on the machine/processor you use, the compiler, potentially the Java Virtual Machine, the OS, other processes ...
There will not be a definite answer to the above questions then, but you might run some experiments on your machine.

For comparing two alternative algorithms, it might be enough to compare a coarser measure, like the number of executed instructions: If one algorithm needs much more instructions, it will (usually) also be slower.

Why Dijkstra's method is hardly used in practice

The invariant for the array is then

i.e. equal elements are put to the extreme ends and have to be swapped to the middle again at the end.

A second way how the DNFP can help in Quicksort is when we use two pivots instead of one. Then, each partitioning step rearranges the array such that small elements are left, elements between the two pivots go to the middle and large ones to the right.

You may find it interesting that the Java 7 runtime library uses dual-pivot Quicksort with a partitioning method that is essentially your algorithm from above!

FrankW's answer above clearly answers my question, however I would like to add an answer from the stackoverflow copy of my question for anyone who bumps into this question. Answer from Yu Hao on StackOverflow

You are right, the extra swap operations are not necessary, this algorithm here is best for clarity, but not for performance. See the discussion of Quick Sort (3 Way Partition).

In Quicksort is optimal by Robert Sedgewich himself, he has a different approach that uses much less swap operation, but you can imagine it also needs more code, and is less clear than the algorithm in the demo. 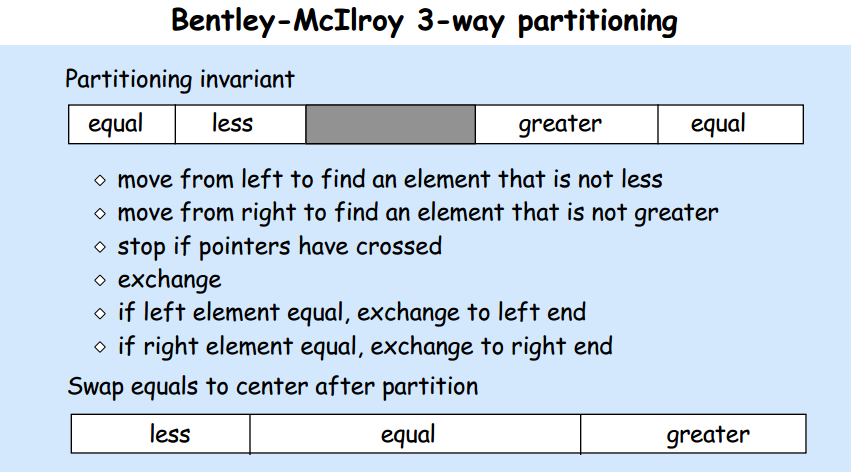 kanwarkanwar
1
$\endgroup$
Add a comment  |
Highly active question. Earn 10 reputation (not counting the association bonus) in order to answer this question. The reputation requirement helps protect this question from spam and non-answer activity.

375
Why is quicksort better than other sorting algorithms in practice?
107
Quicksort Partitioning: Hoare vs. Lomuto

107
Quicksort Partitioning: Hoare vs. Lomuto
1
I can not see why MSD radix sort is theoretically as efficient as LSD radix sort
2
Selection of pivot in quicksort partitioning of Hoare and Lomuto
1
Why does the given solution to this problem works? How can it's correctness be proven?
2
An algorithm for k-way array partitioning
8
Hoare partitioning scheme in Quicksort
1
In this implementation of Hoare-partitioning Quicksort, why are additional checks for $i \leq j$ needed?
2
Can this "double pop" Heapsort variation speed up sorting on average?
1
For QuickFind, which sub problem we should consider
2
Sorted list of counters in constant time