Is connecting islands with pontoons NP-complete?

I have a problem in my mind, I think it is a NPC problem but I don't know how to prove it.

Here is the problem:

There are k islands in a very big lake, and there are n fan-shaped pontoons. Those pontoons are in the same size but have different initial directions and are in different original positions in the lake. The pontoons can rotate freely around its center of mass, and no cost associated with rotation.

Now we need to move those pontoons so that all islands in the lake can be connected. We can guarantee the number of pontoons is enough to connect all the islands.

[Note]: We cannot reuse the pontoons!!

The task is to find the solution having the minimum total distance of the moving pontoons in order to make all islands connected. The distance of moving one pontoon can be calculated as the distance between the center of mass's original position and its deployed position.

To make it clear, I have drawn such a figure. Suppose we have 3 islands A, B and C. They are located somewhere in the lake. And I have several fan-shaped pantoons. Now the solution is to find a minimum moving distance summation to connect A, B and C, shown in bottom part of the figure. Hope it help understand the problem. :) 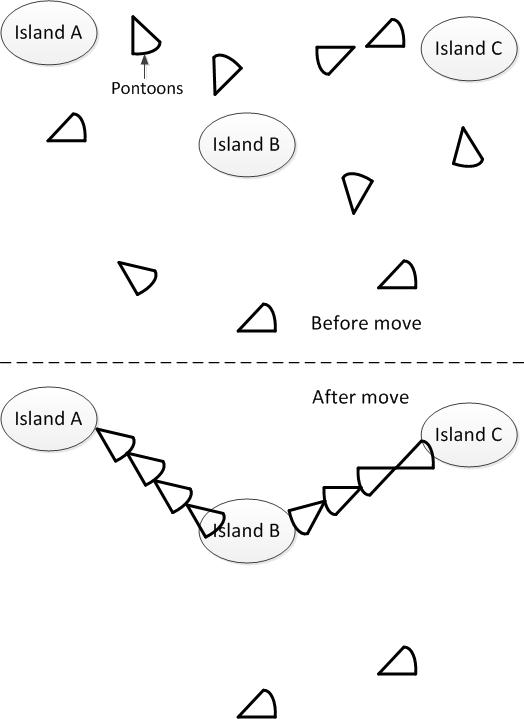 It seems that the problem is a NPC one, but I don't know to prove it. Can anyone help me on this?

Second: This is not the Minimal Weight Spanning Tree Problem. See above-- we require a minimal cost construction not minimal weight identification.

Third: It seems that the constructed path will be a spanning tree, but not necessarily a minimal weight one. The alternative is that it would be a spanning tree plus some additional edges resulting in a cycle; but if we start in a configuration with no edges, then every edge has some positive cost and we can always find a lower weight spanning tree by simply not constructing the extra edges.

This is a little bit subtle, because if we're rotating 90 degrees about an internal point, say, the center of mass, what is the cost? Nothing, because it's a rotation? Some finite amount because the point moved? Now we also need to know the size of the pontoons.

Fifth: One assumes both the pontoons and the islands both are embedded in the Euclidean Plane?

After looking at the new diagrams, I see that you may need multiple pontoons to cross between islands. Given that, you could get very close to a solution of the Steiner Tree problem by turning the nodes into islands and creating a sufficiently diverse collection of pontoons with small arcs. Wikipedia says that there is in fact a PTAS for the Steiner tree problem, so I can't say immediately that this renders it NP-complete. However looking at the details of the Steiner tree might either get you a good approximate solution or show that the problem is NP-Complete.

Ive chosen to edit the original poster's images with some additions to show the graph ideas behind this problem.

The below image shows all (minus 2 to make it simpler) pontoons in differing colors, with all potential pontoon end locations in RED. I have only drawn the lines between 3 pontoons and all of the end locations, but one could see how CRAZY this could get. 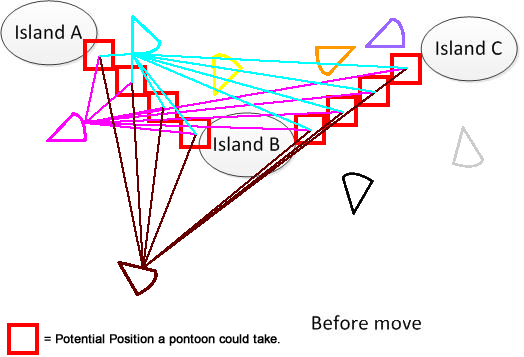 Say that just for the heck of it, we choose for the turquoise pontoon to be placed at the end location closest to it as the first step (although FROM THE TSP we know that this may not be optimal in the end).

Below we see exactly that, the pontoon and the distance (a.k.a. weighted traveling distance) it will have to travel. 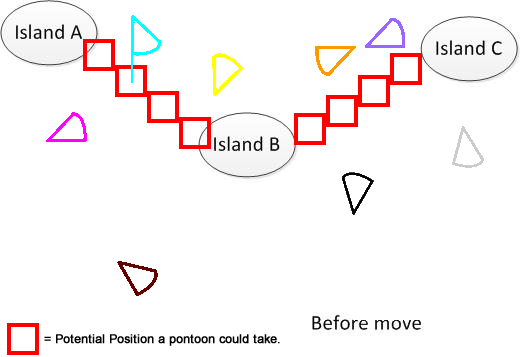 From here a virtual node with the two end locations next to the just placed location may be made. Distance from the set node, and the two adjacent nodes within the virtual node have a virtual travel distance of 0.

Below we see the virtual node created with ALL potential travel distance weights that can be placed there. 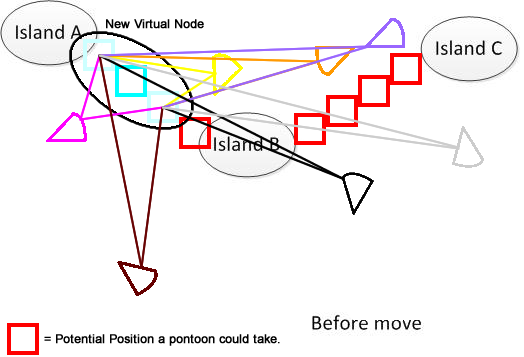 Seeing how this would continue, and how the most optimal solution (as seen many times with the TSP) will not always be by choosing the shortest distance for every choice, we would have to test essentially all paths for all nodes / virtual nodes.

In the end the first node of the (TSP) problem could be any one of the potential end pontoon points, and the lines drawn from that are the distances from that endpoint to all other pontoons. all other nodes afterwards become virtual nodes as I have depicted with their lines coming off as the distances / weights to all remaining pontoons, and so on and so forth. How this graph problem is NOT EXACTLY the traveling salesman problem without the LAST JUMP requirement from the hamiltonian cycle is beyond me. In order to have the exact answer one must test all paths through the graph.

1
Proving that the clique cover problem is in NPC by reducing from k-coloring
10
Easy way to prove that this algorithm eventually terminates
3
Reduction to longest path from longest chain of tiles
0
Is this simple problem NP-complete?
1
Complexity of Block edit distance with Swapping only
2
Proving that Hamiltonian Cycle is reducible to a travelling problem?