Algorithm to find diameter of a tree using BFS/DFS. Why does it work?

This link provides an algorithm for finding the diameter of an undirected tree using BFS/DFS. Summarizing:

Why does it work ?

Page 2 of this provides a reasoning, but it is confusing. I am quoting the initial portion of the proof:

Correctness: Let a and b be any two nodes such that d(a,b) is the diameter of the tree. There is a unique path from a to b. Let t be the first node on that path discovered by BFS. If the paths $p_1$ from s to u and $p_2$ from a to b do not share edges, then the path from t to u includes s. So

The inequalities do not make sense to me.

The intuition behind is very easy to understand. Suppose I have to find longest path that exists between any two nodes in the given tree.

After drawing some diagrams we can observe that the longest path will always occur between two leaf nodes( nodes having only one edge linked). This can also be proved by contradiction that if longest path is between two nodes and either or both of two nodes is not a leaf node then we can extend the path to get a longer path.

So one way is to first check what nodes are leaf nodes, then start BFS from one of the leaf node to get the node farthest from it.

But what is the guarantee that x will be a end point of a maximum path?

All parts of proving the claim hinge on 2 crucial properties of trees with undirected edges:

The most general configuration of all nodes involved can be seen in the following pseudo-graphics ( possibly $s = z_{uv}$ or $s = z_{xy}$ or both ):

There's an error in the linked solution set (see update 2 below), but it can be easily corrected with @Yuval Filmus's suggestion in the question's comment, which further allows us to rule out one of the possibilities mentioned in the solution set.

Note that the linked solution set contains an error:

As @j_random_hacker points out in the comments, Lemma 1 below is not sufficient to show that $u$ is an endpoint of some diameter. Hence, the below proof is incomplete.

Proof 0: If they weren't leaf nodes, we could increase $d(a,b)$ by extending the endpoints to leaf nodes, contradicting $d(a, b)$ being a diameter.

proof: From lemma 1, the first BFS will find an $a$ that is furthest from $s$, which is guaranteed to be one of the endpoints of a diameter. The second BFS will find that diameter, since in a tree there's exactly one simple path between any two nodes.

The first BFS takes you to one end of the diameter and the second BFS from that end takes you to the other end. 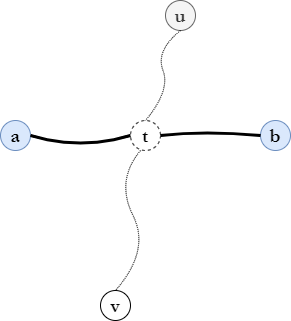 The claim is equivalent to claiming that every deepest leaf in a tree rooted at $s$ is an endpoint to a diameter.

So for contradiction, assume a diameter exists whose endpoints are $(a, b)$, and that a deeper node $d$ exists. Either the shallowest node $x$ in the $a \to b$ path is an ancestor of $d$ or it isn't:

$x$ is an ancestor case:

$x$ is not an ancestor case:

One key thing to know is that a tree is always planar, which means it can be laid out on a plane, so often ordinary 2-dimensional thinking works. In this case, the algorithm says starting anywhere, go as far away as you can. The distance from that point to as far as you can get away from that point is the longest distance in the tree, and therefore the diameter.

This method would also work to find the diameter of a real, physical island if we defined that as the diameter of the smallest circle that would fully enclose the island.

@op, the way the cases are defined in the PDF may be a bit off.

I think that the two cases should be:

The rest of the proof in the PDF should follow.

With this definition, the figure shown by OP falls into Case 2.

First run a DFS from a random node then the diameter of a tree is the path between the deepest leaves of a node in its DFS subtree:

seddik11seddik11
1
$\endgroup$
1
Add a comment  |
Highly active question. Earn 10 reputation (not counting the association bonus) in order to answer this question. The reputation requirement helps protect this question from spam and non-answer activity.

Not the answer you're looking for? Browse other questions tagged algorithms graphs search-algorithms trees graph-traversal or ask your own question.

28
The time complexity of finding the diameter of a graph
45
Longest path in an undirected tree with only one traversal
4
Prove that the total distance is minimised (when travelling across the longest path)
-3
Print all nodes which are the endpoint of the diameter of a tree
1
Does a graph diameter equal to DFS tree depth?
0
Print Binary Tree Diameter Path