Where should we place action symbols in a grammar?

In the following grammar that is used for math expressions(and other grammars) how do I know where should I place action symbols(@add, @mul, @pushID)? Is there a algorithm for it?

For example why @add is between +T and E' and not after E'? I searched for it's algorithm but didn't find anything useful.

Generally, there isn't an algorithm for placing the action symbols. You always need logic in there.

In your case, you want to take the action @add right after you read the second operand of +. The derivations are leftmost, which means that the leftmost rules are going to be expanded and evaluated before the right rules. That said if you have an input of id1 + id2 * id3, the @add action symbol will be useful after id2 because up to then you have the two operands that you want to add. Exactly the same with the @mul, which is useful after id3.

Another issue is the precedence rules of the operations. We want multiplications execute before additions. The above example should be executed as id1 + (id2 * id3). Your grammar takes that into account :) . Let's see the syntax tree and I'm sure that will explain everything to you: 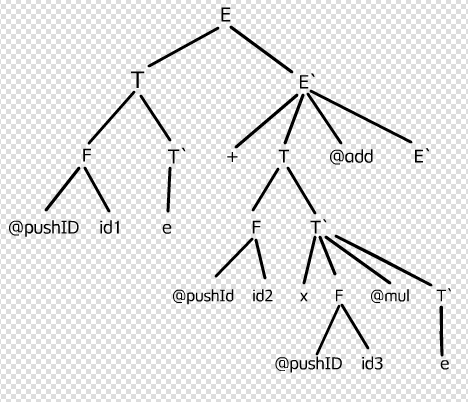 Now you can see the actual sequence of the rules, the precedence of Multiplication and why the position of action symbols isn't something fixed.

In another grammar, somebody would first read the id and after that have an action symbol to take it into the symbol table (usually in programming languages like Fortran).

Don't hesitate to comment me if I did not cover you.

Not the answer you're looking for? Browse other questions tagged formal-grammars compilers or ask your own question.

2
“Grammar inference” for 2-D images
0
Is it “valid” for semantic functions to query outside of the grammar in attribute grammars?
2
Can an (extended) regular grammar have multiple nonterminals in its RHS?
0
Definition of a grammar
1
defining a programming language grammar for doing arithmetic
2
Connection between non determinism and LL(1) conflicts
0
Is there a LL(K) Grammar which is not LALR(K) Grammar?