Has the following problem been studied before? If yes, what approaches/algorithms were developed to solve it?

Given $n$ polygons, find their stable, non-overlapping arrangement that maximizes their stacking height on a fixed floor under the influence of gravity.

and three of their infinitely many stable, non-overlapping arrangements, with different stacking heights: 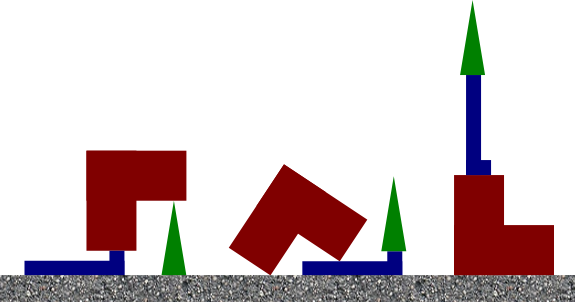 While I don't know of any specific algorithms for this problem, you could approach this in a pretty efficient method by breaking it down into separate parts.

I would start by finding the rotation for each individual shape that provides a maximum height while maintaining a valid balancing orientation (is: not on a point like with the triangle). If a shape has multiple equal heights, i would go with the configuration that gives the greatest surface area on top of it. Once you have this, you can then figure out how to best stack each object in a manor that is able to be balanced.

The following algorithm may not be optimal, but should give a good approximation. We will use Simulated Annealing. Each configuration can be represented by the following parameters:

To evaluate a configuration, we place shapes one at a time in the order given in 1 with the rotation from 2 and horizontal displacement from 3. Wait until the configuration settles into a stable position and then measure its height. A configuration can be "mutated" by changing one of the 3 attributes. Run standard Simulated Annealing procedure to find good configurations. To make this more efficient, we can limit the number of rotations in 2 to $k$ bins. Similarly we can limit the number of possible horizontal displacements. With the right parameters, each of the configurations in the original post can be achieved. For me the hardest part in implementing this is finding a good physics simulator that would allow realistic placement of these shapes.