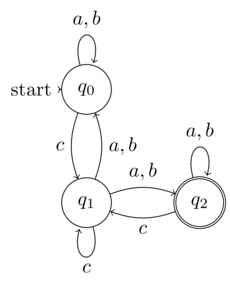 29
Which languages do Perl-compatible regular expressions recognize?
17
For every 'evil' regex, does there exist a non-evil alternative, or is the devil in the grammar?
12
When is a regexp not a Regular Expression?
11
Expressiveness of modern regular expressions
4
Difference between pattern matching and pattern searching in terms of DFA/Regex
2
Is regex with lookaround still regular?
3
Algorithms to match regular expressions containing backreferences
0
No FSM/Regex exists for this language right?
1
Can a regular expression based "grammatic" be programatically minimized?

1
Complete finite automaton to never fail a match but either match original or up until the orginal
4
deterministic finite automaton for "does contain substring $w$" is of linear size
1
Can a regular expression based "grammatic" be programatically minimized?
0
What is the deterministic finitite automaton (DFA) for the regex ".*b."
2
Are all finitely recursive context free languages parseable with a regexp?
14
Why is there no permutation in Regexes? (Even if regular languages seem to be able to do this)
2
When will SLR(1) parser fail but CLR(1) will not
2
Is regex with lookaround still regular?