Testing whether a tetrahedron lies inside a Polyhedron

I have a tetrahedron $t$ and a polyhedron $p$. $t$ is constrained such that it always shares all its vertices with $p$. I want to determine whether $t$ lies inside $p$.

I would like to add one detail to the problem in case it may contribute to the solution: $t$ is a Delaunay tetrahedron and faces of $p$ are triangular and are strongly Delaunay both with respect to vertices of $p$. A tetrahedron is Delaunay if circumsphere of its vertices contains no other vertex inside it. A face is strongly Delaunay if there exists a circumsphere containing vertices of that face on its surface but no other vertex on or inside it. 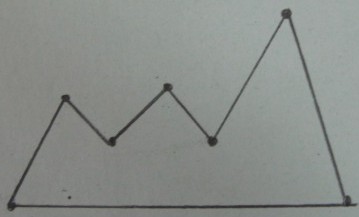 Delaunay triangulation of vertices of $p$: 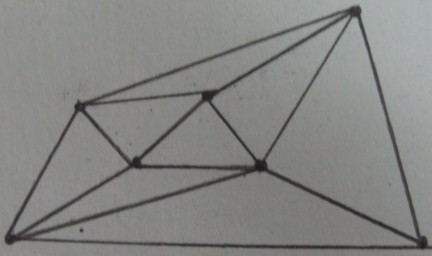 Result of inside/outside test over triangles $t$(Shaded triangles are inside $p$ and rest are outside): 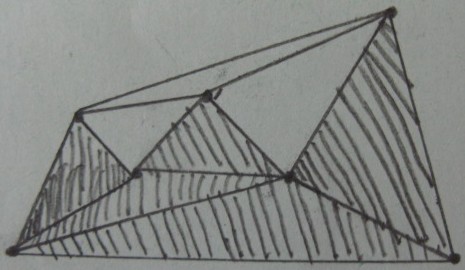 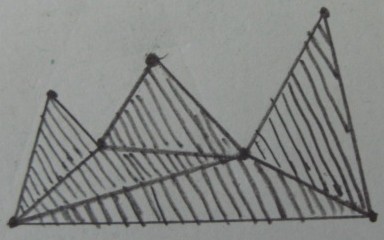 My original problem is in 3D space so triangles $t$ in above figures translate to tetrahedrons and polygon $p$ translates to an arbitrary polyhedron $p$. I have figured out some formulations of this problem:

Formulation 1
The only parts of $t$ which can be outside $p$ are its edges and triangular faces but in general there may exist a $p$ which has edges of all outside $t$'s on its surface, so alternatively, this problem may also be formulated as to test whether for a tetrahedron $t$ there exists a face which lies outside $p$?

Formulation 2
I have another possible perspective towards this problem but lacking any formal idea:
Geometrically, if $t$ is outside then it will always be sticking on the outer surface of $p$. So if we can compute the contours(informally, the outer boundary) $C_{V}$ and $C_{V_{p}}$ such that $V=V_{t}\cup V_{p}$ and $V_t,V_p$ are sets of vertices in $t,p$ respectively, then $C_{V}=C_{V_p}$ iff $t$ lies inside $p$.

Based on above, my core problem now seems to be(please suggest if it should be asked as a separate question):
Is there any numerically robust algorithm for point in polygon problem?

Problem can be solved if I compute the generalized winding number of the centroid of $t$ against the surface of $p$.

Not the answer you're looking for? Browse other questions tagged algorithms computational-geometry topology or ask your own question.

2
Point Location Problem in Polygon in Repetitive Mode for a Simple Polygon
4
Point in Polygon Problem: Has anybody invoked the line integral?
4
delaunay sweep circle initialization
4
An algorithm to find the area of intersection between a convex polygon and a 3D polyhedron?
1
Find all polygons from a set that overlap a given polygon (convex case)
0
Generate triangular surface mesh of convex hull spanned by 8 points in 3D-Space
4
Point in Polygon on the sphere