Given: n variables in X, and m sets of variables where each set, Ci contains a subset of X. I am trying to generate the graph G = (X, E) by picking the edges in E given the following constraints.

The optimal solution for the given variables is: 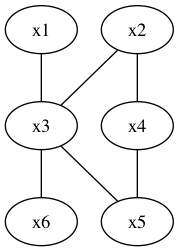 Each subset of variables Ci is connected by a spanning tree, and the degree of x3 is maximised. x3 has a maximised degree, and there are nodes with degrees of 1 (preferred).

There are a few things I am having trouble with.

EDIT: A simpler example without cycles.

There is a spanning tree between, x1 and x2 for C1.

This image shows the graph if I chose all the edges instead of just the spanning tree. It is undesirable as I am trying to minimise the edges, and there is an avoidable cycle.

If I summed the degrees in both cases they are 6. But the second case has a greater variance in the degrees (which is preferred). This is where the concept of dependency comes in, if x2 is removed in the second case, all other nodes are disconnected. In the first case, there would still be an edge between x3 to x4.

My suggestion would be to try simulated annealing. This looks like a good candidate for that heuristic. It sounds like you have some idea what the objective function you want to minimize is (that's good; you need one).

I would suggest that you use simulated annealing as follows:

but of course you can play around with it and try different variations to see which works the best. This might just give you some reasonable solutions.

You could also try formulating this as a SAT or ILP instance, but my sense is that I would try simulated annealing first. If you're lucky, it just might work well enough that you don't need to bother with anything else.

Not the answer you're looking for? Browse other questions tagged graphs spanning-trees or ask your own question.