For a single stream of elements as input every elements should be routed into a fixed number of $k$ output streams trying to keep them balanced. In the following example $k=3$ :

Let's define as flow a sequence of element of the same type represented in the following diagrams using the same colour. Every flow must be routed into the same output stream keeping the elements ordered as found on the input stream: 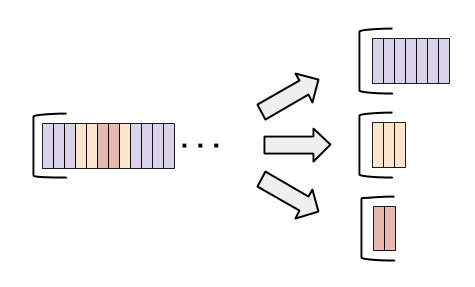 Another correct solution that is more balanced than the previous one:

I have some questions:

Thanks to @D.W. for the comments, here some clarifications:

In an online setting where you must decide immediately where to route each element and where you have no information about the distribution of flow sizes or other domain knowledge, this is the natural strategy. When you see the first element of a flow, you have no information about how large the flow will be, and you must decide immediately where to route it based only upon the current state of the output streams. It's not clear whether there is any theoretical sense in which one can provably do better, if we have zero knowledge.

Now in practice I suspect you will typically have some a priori knowledge about the distribution of flow sizes. In this case, you can do bit better.

If you additionally know what fraction of flows are mice and what fraction are mice, instead of computing a lower bound you can compute an expected value and choose which output stream to route to by going for the choice where the expected value of the imbalance is minimized.

In general, you can use a greedy algorithm that uses expected output stream commitment as the basis for choosing an output stream. Let the random variable $X$ be distributed according to the distribution on flow sizes, i.e., $X$ is a random variable that counts the number of elements in a randomly chosen flow. Suppose you have seen $k$ elements in a particular flow, so far. Then the conditional expectation $\mathbb{E}(X | X\ge k)$ is in some sense your "best guess" at what the total flow size will be; it is the expected flow size, given that the flow contains at least $k$ elements. Thus, you can compute this for each active flow, and compute the sum of these values for each output stream, and route the new flow to the least-committed output stream. If you know the distribution of $X$, you should be able to compute $\mathbb{E}(X | X\ge k)$ easily.

This algorithm is fairly simple and should be pretty efficient: it requires $O(1)$ state per active flow (a counter to keep track of the number of elements seen in that flow so far). Assuming you can compute the conditional expectation in $O(1)$ time, the algorithm requires $O(1)$ time per element.

Whether this algorithm is sufficiently better than the simple greedy (choose the lightest output stream, based only upon its current size, not its expected commitment) in practice can only be answered by experimenting on some realistic data sets.

Not the answer you're looking for? Browse other questions tagged algorithms approximation online-algorithms or ask your own question.

1
Is there a clear line between algorithmic problem and an algorithmic problem instance?
3
What algorithm to use for this subset sum problem
0
Quicksort Algorithm with Pivot element as Median
3
how to check whether a flow network contains unique maximum flow?
2
Can I solve my decision problem in $O(n)$ time?
2
Identifying useless vertices in a directed graph
2
Approximate duplicate sampling from a stream