Polygons generated by a set of segments

Given a set of segments, I would like to compute the set of closed polygons inside the convex hull of the set of the end of those segments. The vertices of the polygons are the intersections of the segments. For example, if you draw the 6 lines restricted which equations are: $x=-1$, $x=0$, $x=1$, $y=-1$, $y=0$, $y=1$, I would like the algorithm to output the four unit squares around the origin. 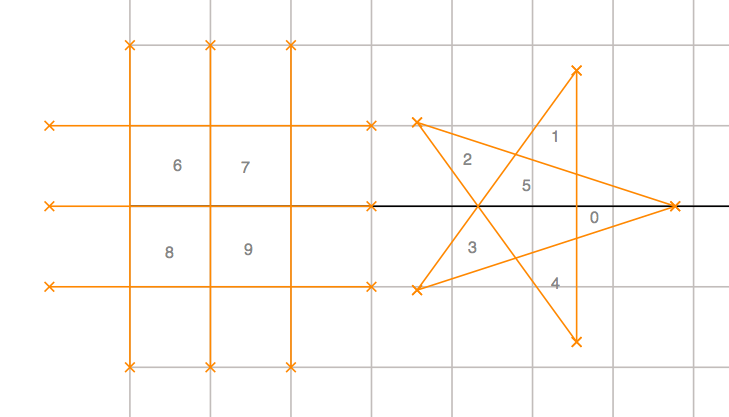 Suppose you are given $n$ line segments, and $k$ pairs of those line segments intersect. (You don't know $k$ in advance.) The intersection points can be computed in $O((n+k)\log n)$ time using the Bentley-Ottmann sweep-line algorithm. (The running time can be reduced to $O(n\log n + I)$ using a more complicated algorithm, where $I\le k$ is the number of intersection points, but the additional effort is probably not worth it.) The algorithm can be modified to report, for each intersection point, which segments intersect at that point. Then it is simply a matter of careful bookkeeping to construct a standard data structure that represents the arrangement.

A few caveats to keep in mind:

20
How to pack polygons inside another polygon?
3
Finding a maximal set of nonintersecting line segments in a unit circle
6
How to find the supremum over all the “good” (interior) polytopes for a given set of 3D points?
0
Generate triangular surface mesh of convex hull spanned by 8 points in 3D-Space