Concept used in the proof [closed]

In the paper "Resolution for Quantified Boolean Formulas", I am unable to understand the proof of theorem 3.4. Please help me with the basic concept used on page 4: 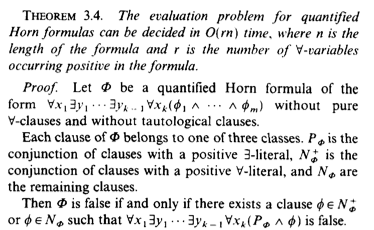 The concept that I am referring to is:

Not the answer you're looking for? Browse other questions tagged algorithms np-complete logic proof-techniques correctness-proof or ask your own question.

7
What is wrong with this seeming contradiction with a paper about AND-compression of SAT?
3
Can quantified renamable Horn formulas be identified using the same procedure as unquantified formulas?
5
Reduction of 3-SAT to Vertex Cover?
1
Algorithm for determining if a statement is a paradox
3
Finding a language that is $NP^L$-complete
0
What can't guarded fragment of FO express?
0
Partitioning a set based on binary predicate
1
Universal Quantifiers in QBFs