I have several questions:

Given the various misunderstandings indicated by the comments, here are some pictures to illustrate these concepts. If you have an idea for an easier to understand terminology (instead of "cover", "equivalence relation", "disjoint union of cliques" and "not necessarily disjoint" union of edge sets), feel free to let me know.

Here is a picture of a graph and one equivalence relation covering it:

Here is a picture of a graph and two equivalence relations covering it: 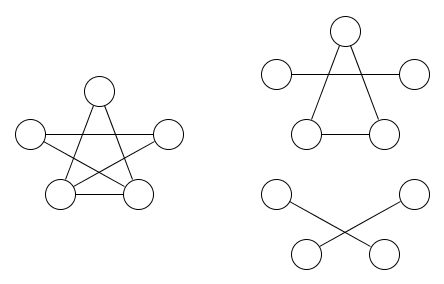 It should be pretty obvious that at least two equivalence relations are required.

Here is a picture of a graph and three equivalence relations covering it: 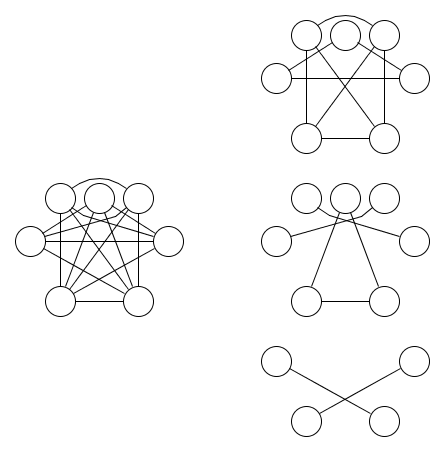 It's less obvious that at least three equivalence relations are required. Lemma 1.9 from Dual of the Logic of Subsets can be used to show that this is true. The generalization of this lemma to nand operations with more than two inputs was the motivation for this question.

The problem is known as the equivalence covering problem in graph theory. It is upper bounded by the clique covering number (the minimum collection of cliques such that each edge of the graph is in at least one clique). There are many similar problems and definitions; one has to be very careful here. These two numbers are denoted by $\text{eq}(G)$ and $\text{cc}(G)$, respectively.

There are special graph classes where the exact value or a good upper bound for either number is known. In general, to the best of my knowledge, the best bounds are given by Alon [1]:

where $\Delta$ is the maximum degree of $G$. By the way, a covering with $\lceil n^2/4 \rceil$ triangles and edges is always possible (cf. Mantel's theorem), and this is easy to find algorithmically as well.

Not surprisingly, computing either number is $\sf NP$-complete. Even for split graphs, computing $\text{eq}(G)$ is $\sf NP$-hard (but can be approximated within an additive constant 1) as shown in [2]. It is also hard to compute for graphs in which no two triangles have a vertex in common [3].

Although I don't know the name for such problem, I can show this problem is NP-hard.

According to this article, finding the chromatic index for a triangle free graph is NP-complete.

Not the answer you're looking for? Browse other questions tagged algorithms graphs clique or ask your own question.