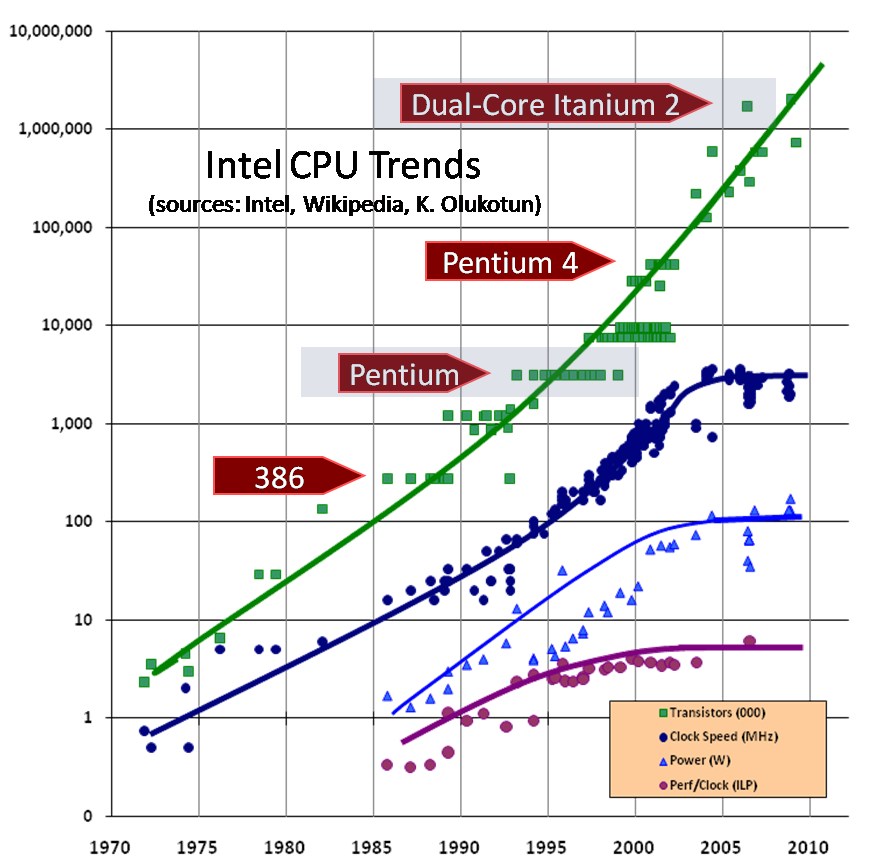 This figure says according to moore's law number of transistors doubles about two years. but clock speed, power flattening after given stage. can anyone describe the reasons this flattening in clock-speed. Why can't we increase the clock speed more and more?

Here is a link to a similar discussion in another stack exchange where the causes are explained.

There are two different "laws" being graphed here, Moore's law, and Dennard scaling. Moore's law is an economic observation, made by Gordon Moore in 1965, that predicts that the number of transistors on a die will tend to double about every two years. It does not seem to be slowing down (yet). While there are reasons to believe that transistors will stop scaling down soon (14nm is 140 Angstroms (about the width of 140 hydrogen atoms)) it may be possible to continue Moore's law scaling for some time, either by making bigger chips (what Moore originally predicted) or by stacking multiple layers of transistors in the 3rd dimension.

the topic of semiconductor scaling is very complex and multidimensional but basically, performance gains in clock speed could come with increased power applied to the chip. but when the gate widths and gate densities get very small (which is not graphed above but is roughly closely related to gate counts which is graphed) the power dissipation (heat) is much more challenging. essentially there is a ceiling where heat cannot be removed any more effectively or faster from the chip except with very expensive and increasingly impractical (unviable) systems eg liquid cooling. some of this heat is due to the following current leakage issue into the chip at a certain gate width reached mid 2000s:

This expanded version of Moore’s law held true into the mid-2000s, at which point the power consumption and clock speed improvements collapsed. The problem at 90nm was that transistor gates became too thin to prevent current from leaking out into the substrate.

the quote comes from this basic summary of the issues:

50
If the speed of electrical charge hasn't changed, how have computers become faster?
22
CPU frequency per year

7
Confused by Floating Point Spacing
3
How is clock syncing implemented?
2
Applying information theory to processor clocks
1
A restatement of Moore's law that takes into account quantum computing
1
CRC computation speed vs polynomials features
0
how does the program change the clock speed of the processor?
0
What is the difference between clock cycle and clock period?