Before asking this question,I had gone through Equivalence of NFA and DFA - proof by construction

but my question is a bit different from that. I was reading Michael Sipser's Introduction to Theory of Computation and I came to a problem. I couldn't understand as to how he is taking his act on equivalence between NFA and DFA.

I have problem understanding this para :-

So,point at my wrong thinking PLEASE. I have understood that while making transitions only those states are considered final states which are accept states in NFA.Am I wrong???So,how come {1,2} be the new accept state in the equivalent DFA?

Secondly, why he has mentioned that

The start state is E({1}), the set of states that are reachable from 1 by traveling along ε arrows, plus 1 itself`.

I couldn't derive a meaning out of this statement,the reason might be my poor understanding of English language(I am non-native English speaker).Means start state is E({1})---fine upto here. Now, the set of states that are reachable from 1 by travelling along ε arrows,plus 1 itself---It doesn't make any meaning standing as an independent sentence. Someone make me understand the meaning of this line,PLEASE!

Someone please make me understand and elaborate a bit. I feel that author might be wrong there,pardon my noobiness or for any mistake! 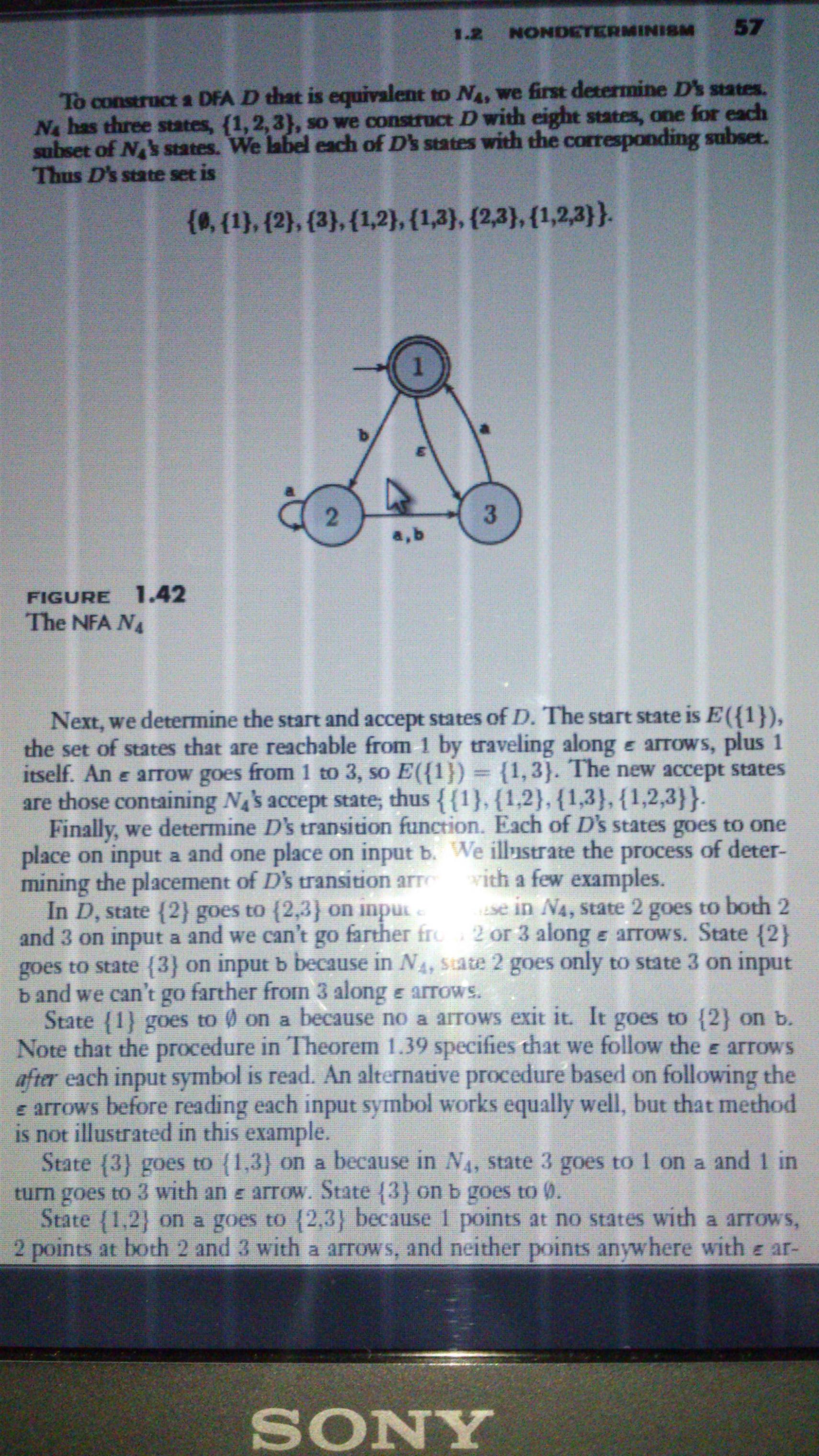 Final States. Let's start with an example: what does the NFA do on input $baa$? We'll have, in order

In other words, at this stage, after having read $baa$ we could find ourself in states 2, 3, or 1.

In the DFA, we have, equivalently, the transitions $\delta'$ defined as

Start State. This answer to your first question has little to do with the answer to your second question. The answer for your second question is: just as we did to determine the final states of $D$, we also need to know what the start state of $D$ is, and in this case it will be the set of states containing the start state of $N_4$, along with any other states that can be reached from that start state via $\epsilon$-moves, namely $\{1, 3\}$ (which of course will also be a final state, though that's not important here).

Your question is unprecise. Yous state that you have a problem understanding some parts of the text, but without any further hint as to the nature of the problem.

I suspect it may be the former, so I will try to answer that. I do not have Sipser's book, so that I cannot relate specifically to his presentation, other than with the page you give.

The major point in this is that state names do not matter. In the example, the names of the initial NFA $N_4$ are the integers $1$, $2$ and $3$. Now, you might wonder whether it is actually the first three natural integers, or only the three characters that represent them (or even, possibly, three strings of one character each). The fact is that it is irrelevant, that it does not matter. All you really need to describe/define your automaton is to have 3 distinct states, and to be able to distinguish them in some way so that you can tell where you start, how you can pass from one to another on some input, and which is accepting.

As usual, when you talk about something, the best way is to identify it with a name, which should refer to it only in a given context. It can be "babou" right now if I am the something. It can be the character "3" or the string "III" if it is the third natural integer, though you can also call it "third natural interger" which people will understand, or it can be the name "Joe" if you have first given the notational definition:

You can play a lot with names, which is sometimes very convenient. In particular, there is no reasons that names should be only spoken utterances, or written character strings. It works as well if you take names from any set, such as integers, or sets of integers for example.

Since other things, such as integers or sets of integers, need to be named too to talk about them, it is hard to know whether you are using themselves or their names when the names is written down. We have seen that there are notational devices to make the distinction when it is important (using quotes, for example), but you can often forget about it.

So here $1$, $2$, and $3$ are the names of the states. We now see that whether they stand for the character or the integer does not actually matter muuch.

In other words, in languages and automata theory, when you talk of a set of states or symbols, you can take any set of mathematical objects that you can enumerate (give me some time to think about sets that are countable but not recursively enumerable ... but this is no worry of yours). They do not even need to come from a consistent source. You only want them as names in order to describe and run you automaton.

But this should not encourage you to use strange naming. This naming freedom should rather be used to make things easier to understand and remember. This is probably why Sipser used $1$ for the start state.

You have exactly the same situation in programming, when you have to choose names/identifiers for variables, functions, classes or other entities, though these names are usually restricted to alphanumeric strings. Good programming practice recommands the use of identifiers that are meaningful, and help understand the program.

This choice of names is convenient, and helps understanding, because because a state of $D$ is intended to mimic (in some precise sense) the behavior of several states of $N_4$, precisely those it contains.

A complementary or alternative view of this is to consider that automata that use different state names are defined up to a renaming of states. What one is interested in is the equivalence class up to a renaming equivalence relation, since renaming does not change the behavior of the automaton.

Understanding the use of names is not as obvious as it may seem, and it can raise sometimes thornier technical issues, though not really here.

The following is an attempt at explaining informally the idea of the construction. There are other ways to look at it, somewhat more theoretical. I do not know how Sipser precisely does it.

The principle of the construction of the DFA $D$ from the NFA $N_4$ is that, for a given input, the DFA $D$ simulates all the computations that $N_4$ could follow depending on non-deterministic choices it permits. In other words, for an input string $w$, $D$ will reach a state, which is precisely the set of all states that $N_4$ could reach for some computation with that same input $w$. That is why a state of $D$ is a set of states of $N_4$.

This must remain true for all other states of $D$ (which are sets of states of $N_4$). The DFA $D$ reaches state $S$ after reading string $w$ if and only if, for each $N_4$ state $q$ in $S$, there is at least one computation of $N_4$ that reaches state $q$ when reading $w$. That is what the construction does.

Since $D$ is supposed to accepts all the strings accepted by $N_4$, it follows that $S$ must be an accept state of $D$. There is no other way to accept the string $w$ since $D$ is deterministic by construction.

First I must say I cannot understand what you are saying in the paragraph that starts with:

To begin with, as I said in a comment, you do not have lists of states, only sets of states. Second, you should talk of accept states, or accepting states, but not of accepted states.

My further attempt to explain

The sentence you do not understand is apparently a problem with English. It should be read as

The start state is E({1}) which is the set of states that are reachable from 1 by traveling along ε arrows, plus 1 itself`.

I think this kind of sentence structure (with a comma instead of "which is") is called an apposition.

Not the answer you're looking for? Browse other questions tagged regular-languages automata finite-automata nondeterminism or ask your own question.

19
Why is it important for functions to be anonymous in lambda calculus?
6
Are turing machine really countable?
1
Why are pushdown automata countable?

7
Converting an NFA to regex using GNFA algorithm?
2
NFA to DFA convertion explanation
0
Number of Final States Subset Construction for NFA to DFA
3
Converting generalized NFAs to NFAs
3
An NFA with no equivalent DFA with fewer than $2^n$ states: Example and Proof
5
Does the smallest DFA equivalent to this NFA requires at least $O(2^n)$ state?
0
Create a DFA and a NFA where the word includes (two) consecutive zeroes
2
Polynomial-time Compute the Number of States resulting from the NFA to DFA (greedy) conversion?