First of all, excuse me if I write a lot, I tried to summarize my research so that everyone can understand.

R. Baeza-Yates and M. Regnier published in 1993 a new algorithm for searching a two dimensional mm pattern in a two dimensional nn text. The publication [1] is very well written and quite understandable for a novice like me, the algorithm is described in pseudocode and I was able to implements it successfully.

One part of the BYR algorithm requires the Aho-Corasick algorithm. This allows to search occurences of multiple keywords in a string text. However, they also say that this part of their algorithm can be greatly improved by using Aho-Corasick not, but Commentz-Walter algorithm (based on Boyer-Moore rather than Knuth-Morris-Pratt algorithm). They evoke an alternative to the Commentz-Walter algorithm, alternative that they themselves developed. This is described and explained in their previous publication [2] (see 4th chapter).

This is where my problem lies. As I said, the algorithm goes through the text and check if it contains a word from the set of keywords. The words are arranged upside down and placed in a tree. To be efficient, it will sometimes be necessary to skip a number of letters, when he knows that there is no match found. 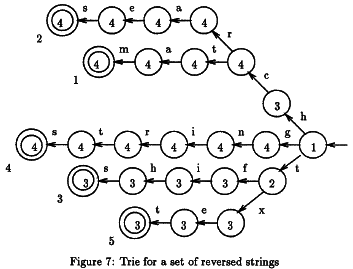 To determine the number of characters that can be skipped, two tables d and dd have to be computed. Then, the algorithm is very simple:

The algorithm works as follows:

My problem is that I do not know how to compute the dd function. In their publication, R. Baeza-Yates and M. Regnier propose a formal definition of it:

They give no indication concerning the construction of this function. They only recommend to use the work of W. Rytter [3]. This document builds a function similar to that expected, the difference being that in this case, there is only one keyword and not a set.

The definiton of dd (called D here), is as follow:

It may be noted similarities with the previous definition, but I do not understand everything.

The pseudocode for the construction of this function is given in the paper, I have implemented it, here in C++.

I did not find any other information about their algorithm, it is impossible for me to know how to implement the construction of dd, but I am looking for someone who could perhaps understand and show me how to get there, explaining me the link between the definitions of D and dd.

10
Fast k mismatch string matching algorithm
10
An example where Knuth-Morris-Pratt Algorithm is faster than Boyer-Moore?
1
Bit-parallelism and NFA simulation
1
What is a recursion for Huffman encoding?
1
A fuzzy string matching algorithm for finding all occurrences from a set of strings in a large string
2
What is an efficient data structure for prefix matching?
2
reverse string to pattern matching
5
Isn't this Commentz-Walter algorithm buggy?