Search in a partial ordering defined by tuples of numbers

This is a graph theory and partial ordering problem. Consider a set of triples {(di,ai,ci)}i=1...N, which specify edges between two nodes A and B, d denotes a departure time, a an arrival time and c a cost. Technically there can be multiple incomparable costs, for example in $ and % chance that your goods arrive safely.

An example of such a situation could be these 5 edges: 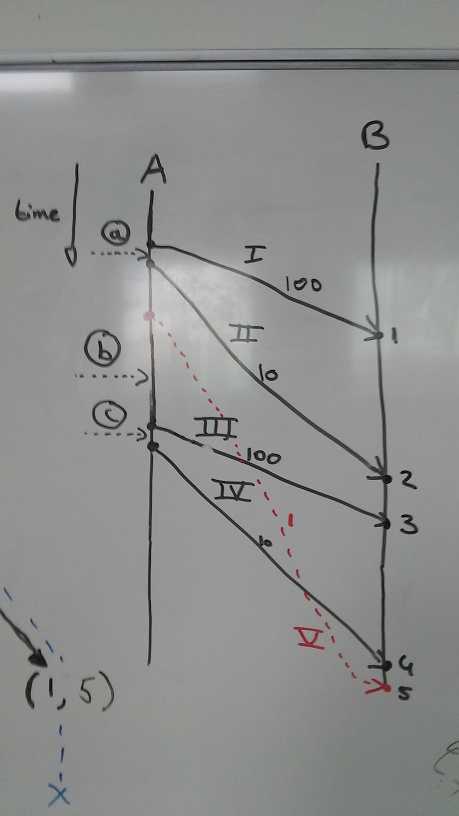 (I did not draw the time axis on scale)

There are five edges, I, II, III, IV and V. The costs are denoted at the edges, they are either 100, 10 or 1. Edge V is drawn red to easily discriminate it from the other edges, since it crosses through them. However, aside from that it is not different.

Given such edges, a few things are important:

We can enumerate all the edges:

Putting them in a partial ordering, using a directed acyclic graph (dag), we get this: 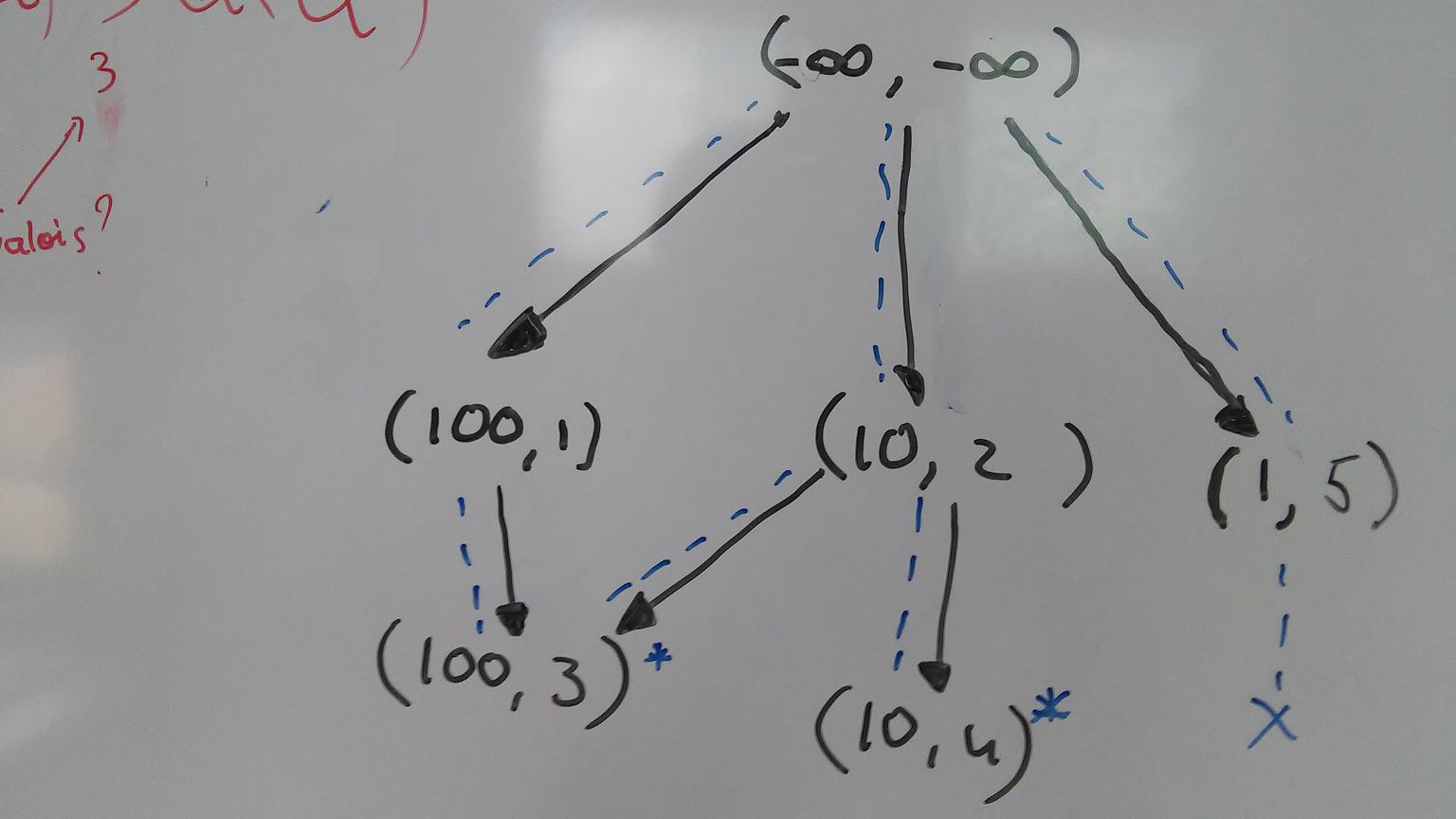 I added an edge (-∞, -∞), which is always irrelevant, but creates a nice 'root' of the dag. This way we sort of have a tree, where leaves sometimes merge without creating cycles. I also only denote the arrival at B and cost, needed to create the dag, but technically there is also a departure are A for each of the edges.

If we were to arrive at A at -1, we can simply return all the children of (-∞, -∞) as relevant and undominated, but for another arrival we may need to traverse the tree differently (in a more complicated fashion). I was thinking of this:

I solved my OP as my intuition was. First I created a graph as described by the second picture of the OP. Then I traverse it like this:

Initially only the root of the dag is in the is in the front. Then the front is moved towards the 'leaves' of the dag as the arrival times increase, that is, certain options 'fade away' and hence are replaced by other options.

Notice that I have a tree-view on the dag. The key difference is that a node can have more parents, hence I mark which nodes are already visited, preventing one from visiting them twice via different parents.

I find this solution more satisfying then @d-w's, since he did not address the problem of multiple costs, like stated in the OP: "Technically there can be multiple incomparable costs, for example in $ and % chance that your goods arrive safely.", nor did he comment on it. If you have only one cost, his solution is adequate.

This is the problem of enumerating all minimal elements of a partial order. Your edge dominance relation defines the partial order.

In the simple case where you arrive at time $-1$, the partial order consists of all of the "edges", and you're just looking to enumerate all minimal elements in this partial order.

In your case, there is a much more efficient algorithm. Each edge corresponds to a pair $(a,c)$, with the arrival time and the cost. Imagine plotting these on (the upper-right quadrant of) the 2-D plane. Now we want the subset of points that don't have any point below-and-to-the-left of them.

This subset can be computed in $O(n \lg n)$ time. First sort the points by arrival time, i.e., by $a$-value. Now iterate through the points, in increasing order of arrival time. As you iterate, keep track of the smallest cost (smallest $c$-value) you've seen so far. When you see a point that has a smaller cost than any previously seen, add it to the subset: it is a minimal point (it is not dominated by any other point).

In this way, you can find all of the minimal elements of your partial order in $O(n \lg n)$ time, where $n$ denotes the number of edges in your original problem.

We can adopt the above methods to the more general case where you arrive at time $t$. Now the partial order consists of all edges that apart after time $t$.

It's easy to construct this partial order with an initial filtering pass: simply throw away all of the edges that depart before time $t$. This can be done in a simple $O(n)$ time linear scan of all of the edges.

Next, you want to final all the minimal elements in this partial order. This can be done in $O(n \lg n)$ time, using the method described above. So, this solves your problem of finding all of the Pareto-minimal (undominated) edges, efficiently.

You might like to read the following articles about lattices and partial orders and their role in computer science:

Not the answer you're looking for? Browse other questions tagged graphs graph-traversal partial-order or ask your own question.

3
Correctness of splitting an undirected tree into a forest of trees with even number of children
6
Traversing a graph with respect to some partial order
3
Efficiently determine relative ordering between two elements in a PO-set
1
How to minimally extend a digraph such that all nodes are on a cycle?
2
Is there a variant of Dijkstra’s algorithm for partial recalculation?
6
Find all nodes on simple paths between two nodes in cyclic directed graph