Advantages and disadvantages of microcoded vs hardcoded architectures [closed]

I can't understand what are the advantages and disadvantages of microcoded processor architecture and hardcoded one.
Basically what I understood is that a microcode architecture divides an istruction in more microinstructions. I didn't found much documentation written in a simple way (too much complicated) so I'm asking you: what are the advantages and disadvantages of each one?
Due to the large amount of aspect of this "subject", I'll recap the question into three main aspects:

A microcoded architecture should semplify the design of each instruction, it means that it's do much more difficoult to design a full hard coded processor?
Or maybe hardcoded archtecture is suitable for microcontrollers or smaller design?

Wikipedia (not the most reliable source, I know) says that a microcoded architecture is a little slower than an hardcoded one. It also says that microinstruction are used to build complex instruction, but these are not commonly used because programmers prefer high level languages, and compilers prefer using simpler but faster instruction.
From this point of view, is still necessary to design microcoded processor?

If microcoded archtectures help the creation of complex instruction (= easier assembly development?), hardcoded ones help programmers in any way during their work? This seems a stupid question but I think it's not.
Looking at this site of assembly game programmers (I hope I can post that link, FAQ says to share your research), one guy says that HuC6280 processor has the best instruction set because:

Fav[ourite]: HuC6280.
Basically a 65CS02 set (Rockwell's added instructions).
Optimizing is soo much fun. There are some super crazy optimizations for this style chip out there.
I know people will fight to the death (or possibly argue) that it's not RISC, but it definitely had some precusor ideas of RISC.
A very small, simple, but fast instruction set (hard coded, not microcoded), a large set of 128 16bit address registers (also halved as 256 8bit data registers).
The immediate operand instructions are very fast and lend themselves perfectly for self modifying code.
The downside is the small logical address range of the PC. All optimizations have to be made local and very specific.
Look up tables (LUTs) need to be organized accordingly (and interleaved for 16bit and wider data elements).
One thing I never understood is why they never implemented immediate operand opcodes as 1 cycle instead of 2, since the chip would perform a fetch cycle while operating an ALU operation on other opcodes.
Same for implied instructions (flag changing).

He seems to be very excited about that architecture. One point to hardcoded design?
However, I found that HuC6280 is an 8bit processor, it is much much simplier than modern ones. It means that hardcoded would be preferrable if its design wasn't so hard?
EDIT: He also quote self modifying code, which is not commonly used today (due to high level programming maybe) but for assembly programmer is quite an important feature.

I know that this is an hard question, explanation might be long. If you (guy with much more experience than me) want to answer, may you add some example of hardcoded architecture? It would be much appreciated. Both modern and deprecated are ok


And thanks for reading all this poem

That said, here's the distinction: We divide the design into datapath and control. Here's the picture of the MIC-1 from Tanenbaum's Computer Organization book. (The image is by Suyog.karnawat, from Wikimedia commons.) Everything in the design is the datapath except the box in the upper right hand side that says "Instruction decoder and control logic." 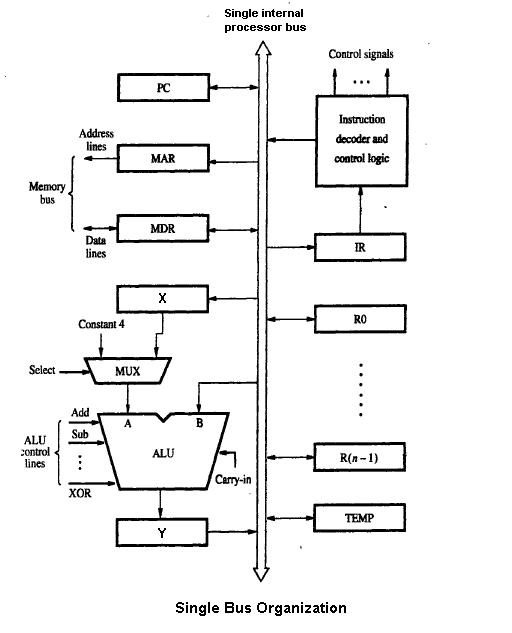 The "Insruction decoder and control logic" box is a finite state machine. The datapath in this example is very simple, with only a single bus, so even an instruction to add two registers and put the result in a third register takes multiple cycles (each of which corresponds to a state in the state machine.)

So 9 state transitions to perform a simple add instruction.

So the "Instruction decoder and control logic" is a finite state machine with inputs from the IR register, outputs are the control signals, and there must be some flip-flops inside to represent the state of the state machine. But there are lots and lots of ways to implement a state machine.

And the combinational logic for the control signals and next state functions can be implemented any number of ways:

ROMs can get really huge if you're not careful. For example a ROM-based design would almost always use $\lceil \log_2 N \rceil$ flip-flops, because making the state wider also makes it sparser, which is sometimes good for gates but not for ROMs. Also, you would only use the opcode bits as part of the address to the ROM, not the register specifiers and such.

So the distinction between "hardcoded" and "microcoded" is only one very small decision that needs to be made among hundreds of design decisions. And it's certainly not the most important one. (For example, you could choose to put a second bus on the datapath, which would enable you to perform some instructions with a lot less cycles.)

16
why do CPU architectures use a flags register (advantages?)
2
What are the disadvantages of having many registers?
1
What are advantages / disadvantages of horizontal and vertical microprograms?
3
What is random logic? Why is it needed?
1
Advantages of FPGAs over GPUs
3
How are CPU architecture and word size related?
1
If the MOVE instruction in a Transport Triggered Architecture can implement a NAND gate (as a Functional Unit)
0
Metrics on which Clock Cycles Per Instruction(CPI) depends
0
How much faster is the ideal machine without the memory structural hazard versus the machine with the hazard?