Background information: The question came up when I tried to implement in code the solution to what is called the "tramp steamer" problem: Given a graph G(V,E) in which each node is associated with a cost $c_i$ and each edge is associated with a time (number of days) $t_i$, find the cycle with the smallest ratio of cost to time $\frac{\sum_i(c_i)}{\sum_i(t_i)}$ (i.e. minimal cost/day cycle).

One solution is to do a binary search with the range of possible rations, trying to identify the minimum cost-to-time ratio $\mu$. In each iteration of the binary search in the range $[left...right]$, you "guess" a value of $\mu = \frac{left+right}{2}$ and then run Bellman-Ford:

How exactly is the third case detected? Assume the graph A->B->C->D->{A,B} with two cycles (fro D back to A or B) where the cycle B->C->D->B is the optimal one and yields zero length for some selection of $\mu$ for which the other cycle is positive. Suppose we happen to try this particular value of $\mu$ (let's assume it's during the very first iteration because we got lucky). If I am using vertex A as the fixed point from which I run Bellman-Ford on each iteration, it will complete successfully without detecting a negative cycle. But how would the zero-length cycle be identified?

Currently I only handle the first 2 cases and my implementation keeps iterating until the $[left...right]$ range becomes becomes too small, so that floating point precision can't handle a smaller range. At that point I detect that $\frac{left+right}{2}$ is equal to one of the range limits (either left or right) and stop the binary search. How would I go about detecting that a particular value of $\mu$ has produced a zero-length cycle?

Here's how you can detect whether a weighted graph $G$ contains a zero-length cycle, assuming it does not contain any negative cycle.

I'll leave it to you as an exercise to prove that the original graph $G$ contains a zero-length cycle if and only if the new graph $G'$ has a cycle.

I don't think there is a known algorithm to find whether there is a zero-distance cycle in a graph in a polynomial time, as it is an NP-complete problem.

$S$ is a known NP-Complete problem. A proof of its NP-Completeness can be found in chapter 8, section 8.8 of Algorithm Design, by Jon Kleinberg and Éva Tardos. It reduces SAT to 3D-Matching to Subset-Sum. It has another version of $S$, but it can be proven equivalent by polynomial reduction with the one used in this answer.

For a three element $S$ problem we would get a graph such as this: 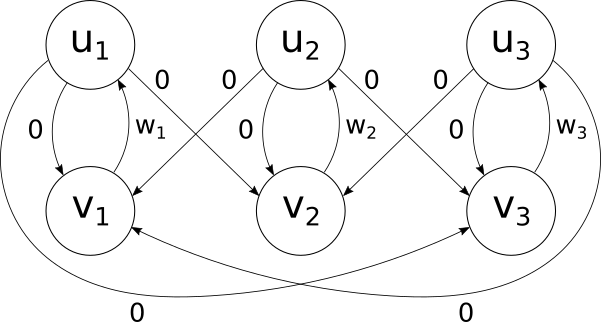 Now, we send that graph to an hypothetic $Z$ solver. Some important notes:

As a conclusion, if a zero-distance cycle is found by the $Z$ solver, that would mean that there is a subset of $W$ with zero sum. This confirms that $S \leqslant_p Z$, and because of that $Z$ is NP-Complete.