There is a classic puzzle book game very similar to a crossword puzzle, except a list of words is given and then a $N \times N$ square board made up of unit squares is given, with some squares blacked out just like a cross-word, and some squares have a letter already pre-written in them. The goal is to write each word from the list once and only once in the puzzle, where each word is written either horizontally (left to right) or vertically (top down) into non-blacked out consecutive squares, and when you write a word, the two squares flanking the ends of the word must either be blacked out or off the board. Also for the letters pre-written into some squares, the words written that overlap these squares must respect the pre-written letter.

Now, if we assume a fixed size alphabet for the words, is deciding whether we can fill the board with a valid solution using exactly each word on the list once and only once an NP-complete problem, if the side length of the board is not fixed?

I´ve been thinking about it and i think that the problem with a fixed alphabet is NP-complete as well.

Yesterday i was having trouble coming with ideas for solving the problem. I had trouble making each variable different until i looked again at the question and i realized that you allowed having squares with planted symbols. This simplified the reduction a lot. My other idea was to have words of different length for each different variable.

Now i´m going to describe the gadgets we are gonna use:

Then we create two different vertical words for each variable. All words will have a length of $3 + |n|$ (Only if we allow duplicate words in the list of words), where $|n|$ is the length of the binary chain $n$.

For instance, let the biggest index be the number $4$. When we transform this number in binary we obtain the chain $100$ in binary, this chain has a length of three. So each variable word will have a length of $6$ in this example.

The other word is almost the same but it will have the symbol $4$ instead of the symbol $3$.

For instance, let the biggest index be the number $4$. We will have the following two words for the variable with index $1$:

We have to copy these words many times, we will need one copy of each word for each occurence of a variable in the SAT instance. This will create duplicates in the list of words. We can get rid of the duplicates by adding another binary chain to the binary chain that uniquely identifies the variable. This new chain will uniquely identify each ocurrence of a variable.

To do that, we simply assign each ocurrence of the variable another binary chain and we olace that chain at the end of the binary representation of the variable.

To create this new binary chain first we have to create a different index for each variable, we call the biggest number in each index $n_i$ where $i$ is an identifier for each variable. After that, we transform the number $n_i$ into a binary chain and then we count the length of the chain, we call this number $|n_i|$. Then, for each index, we create a different binary number for each ocurrence of the variable. We pad the number with zeroes until the length of the binary chain becomes $|n_i|$ so that all the words that belong to each ocurrence of the variable have the same length.

This will get rid of duplicates inside the variable words.

For instance, suppose that variable $x_2$ appears three times in the SAT instance. We create the following words:

Now, let´s see a picture of a clause gadget in the board:

As we see, there are written squares. The vertical columns have written symbols to indicate which literals are inside the clause. The end and the beginning of the column are blank squares. This lets the player choose the value of the variable. The marked symbols in the horizontal row force the player to put a clause word in that row. Because all clause words have only a single symbol $4$ that means that only one of the literals that is inside the clause gadget can be set to "true".

If we don´t allow duplicates inside the list of words we will have to modify the image.

The clause row in the image will become: $5b5b5b10$ and the literal columns will be, from left to right:

This is a gadget that ensures that the player can only asign the same value for all literal columns of a variable.

We will have a new gadget for each variable

We will create two new words for each gadget.

For instance if a variable $x_2$ has two ocurrences, the words that belong to the corresponding variable assignment gadget will be:

If we want to avoid repeated words, notice that each consistency gadget belongs to a different variable. So we can append the binary chain that identifies each variable to the two words that we created for this gadget.

Now let´s see an example picture of this gadget:

If we don´t allow duplicates in the list of words, the words inside the example picture will be:

This is a gadget created to place the unused clause words. To do that, we have only to place two rows for each clause word in an empty part of the board. These rows are not connected to any other row or column.

If the previous explanation was confusing, here is an example picture of an instance of positive 1 in 3 SAT that has been reduced to this word problem: 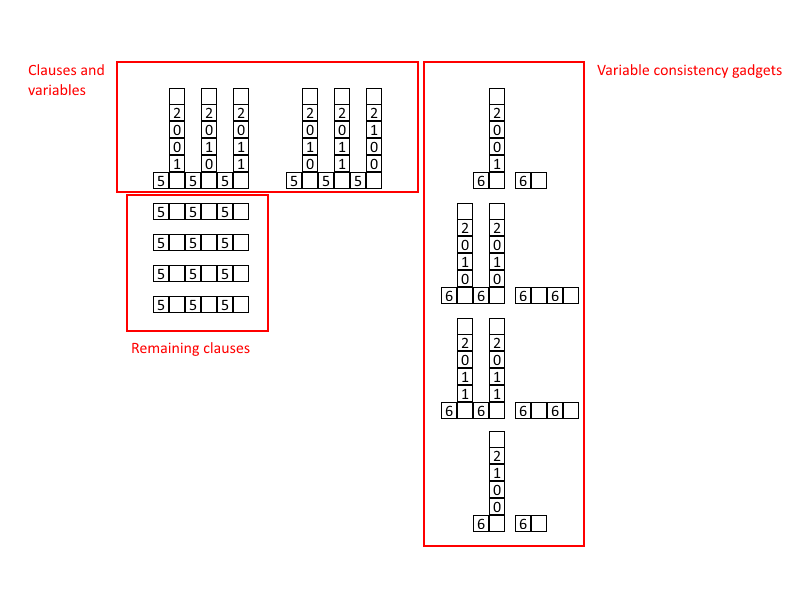 If we disallow repeated words: 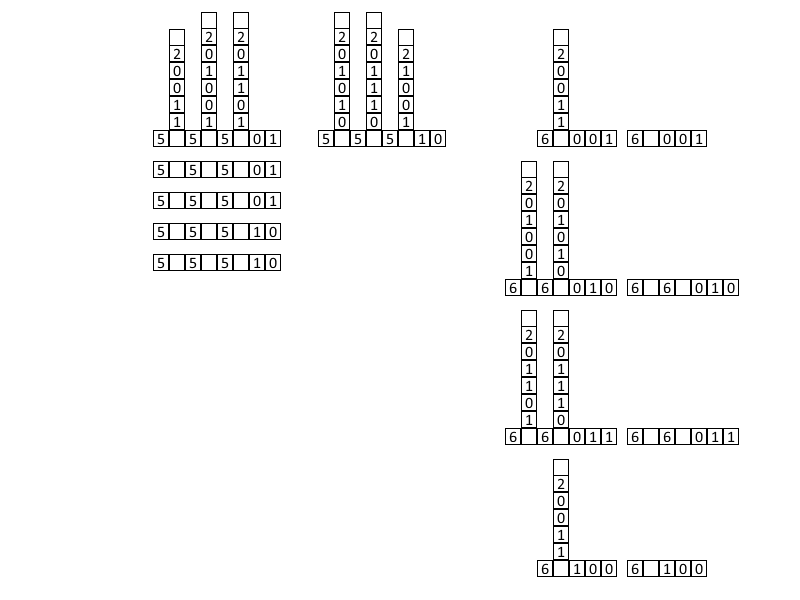 The instance that has been reduced is:

I think the following reduction from Directed Hamiltonian path works:

The board consists of two parts. The first looks like $|V|$ horizontal "stairs" of length 3, stacked on top of each other, as depicted here: 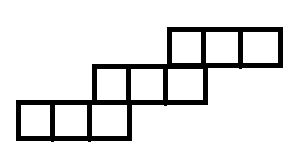 Also, we set in the first (bottom) step of the stairs the word $s*s$ (and remove it from the word list), and in the last step we put $t*t$.

Now, in order to fill the stairs, only vertex-words can be put within the steps, and in order to connect two vertices, an edge word must be put between them, which corresponds to an existing edge in the graph. The unused edges can be put in the second part of the board. The second direction is trivial.

I think this works (the correctness proof I sketched is hand-waved at best, but still).

Not the answer you're looking for? Browse other questions tagged complexity-theory np-complete board-games or ask your own question.

18
Are 'zero-one' jigsaw puzzles NP-complete?
0
Checking whether a node is expandable
5
Building maze to maximize shortest path, may be given waypoints and teleports
3
Finding the shortest path for synchronized pawns in a maze
5
Using decision oracle to solve optimization problem of maximum polyomino tiling
9
Is the leapfrog automata problem in P?
1
How to remove an ordering requirement from a board game simulation?
1
Another version of Geography Game