Why is there still nondeterminism in my automaton?

I've been solving some exercises recently and it appears my answer was wrong for this particular example. The task is to convert this NFA into a DFA: 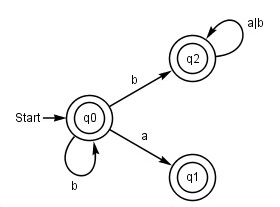 My attempt is this: 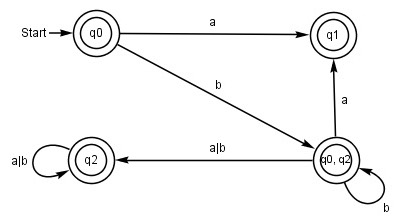 Now the tool I'm using (Exorciser) says that there is still nondeterminism in the automaton (even though it's equivalent to the original).

I don't see it; where is the mistake?

Following this mini-method I told above, you can figure out where you are wrong.

However, for conversion of NFA's to DFA's, I recommend following a Powerset Construction algorithm by which mistakes are minimal.

4
Converting NFA to DFA
2
Use DFA minimization on LR(1) states
0
How to make a NFA (or DFA) from $\varepsilon$NFA?
5
Does the smallest DFA equivalent to this NFA requires at least $O(2^n)$ state?
1
Two way finite state Automaton NP Compleness definition clarification?
3
Is there an NFA whose corresponding DFA has lesser number of states than the given NFA? (without unreachable states or epsilon moves)
2
The order of ε-transitions in NFA
0
Is automaton not practical in real coding?
0
Build an FA that accepts only the words baa, ab, and abb and no other strings longer or shorter