in one of lecture, our professor draw this Turing Machine, and wrote DELTA is Neutral element of TM. 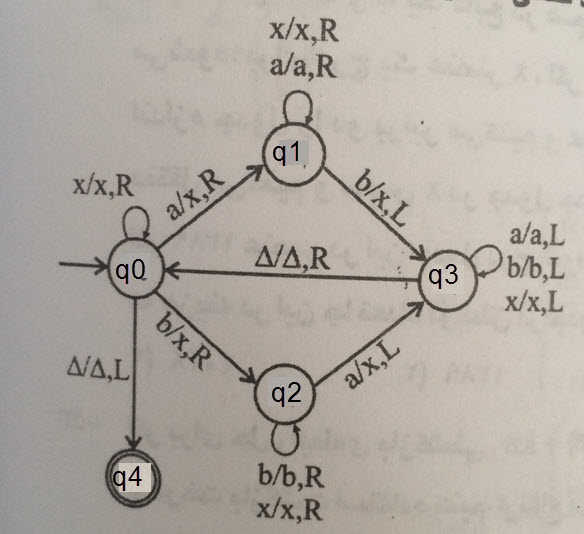 anyone could add some detail or hint for this note and which of them is correct?

Look at the instructions like $a/x,R$ in the diagram. They are used to "mark" the letters that have been compared (for every $a$ marked, we also mark a $b$). The TM repeatedly marks a pair of different symbols, and then restarts at the left side of the tape.

The machine works as follows. It starts at the leftmost symbol of a tape. It skips all $x$'s (in $q0$ moving right) and looks for the first $a$ or $b$, moving to $q1$ and $q2$ respectively (to distinguish cases). In that state it looks for the other symbol skipping $x$'s, and $a$'s or $b$'s depending on the letter we found first. At that point (in $q3$) it returns to the left of the tape (moving left until a blank $\Delta$ is found) and repeats. Acceptance if in $q0$ we only find $x$'s and reach the blank $\Delta$ to the right of the tape.

This indicates that $x$ is a special symbol from the tape alphabet, but not the input alphabet, and is used for administration during the computation. The original language is correct: $\{ w\in \{a,b\}^* \mid n_a(x) = n_b(x) \}$.

Technically it could be the case that $x$ is also in the input alphabet. However what your professor stated is consistent with the diagram. A language over $\{a,b\}$, and an extra tape symbol $x$ to mark symbols that have been accounted for.

You are right in that the machine verifies that the input word contains as many $a$ as $b$.

If $x$ is an allowed input symbol or not depends on the definition of the input alphabet, which can not be deduced from the image.

Not the answer you're looking for? Browse other questions tagged turing-machines automata or ask your own question.

44
Determining capabilities of a min-heap (or other exotic) state machines
1
Are there any steps or rules to draw a DFA?
2
Language of TMs such that one state is visited most often
2
Can an alphabet be extended in a reduction proof? (with sample problem)
2
The “complexity” of the Turing machine state specification