Is there any way to combine multiple Hidden Markov Models trained from different sets of data? For example, I want to detect the phases of a sequential activity. I collect two sets of data by using two types of sensors: accelerometer, and video stream. I create two HMM models from the accelerometer and video stream, respectively. To increate accuracy, can I combine the two models? 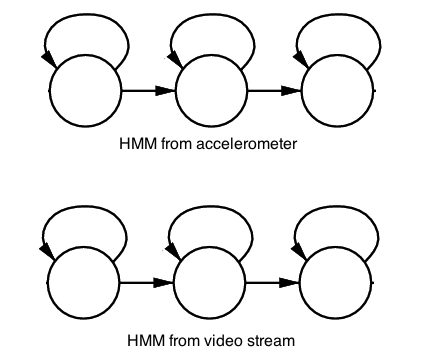 The "product construction" is a standard construction from automata theory class (e.g., typically taught in the context of finite-state automata). It can be applied to HMM's as well, and it will do exactly what you want.

This assumes that the internal states of the two HMM processes are independent. That's something you'll need to verify yourself, to see whether the independence assumption seems reasonable in your particular application domain.

I would just use product states/transitions and probabilities.

Say accelerometer has states A, B...

Then we denote probability of transition from state 'foo' to state 'bar' while emitting character baz as P(foo,bar,baz).

I would then continue training it to capture any lack of independence however.

Not the answer you're looking for? Browse other questions tagged machine-learning hidden-markov-models or ask your own question.