I'm implementing the algorithm presented in "Improved Parameterized Upper Bounds for Vertex Cover" paper (PDF). I'm a bit stumped by the General-Fold procedure. What it should do is reduce the number of vertices (and) edges in the graph by finding specific structures (almost-crowns) and replacing them with a single vertex. (There is also a separate case, but I'm focusing on the described one now).

1) If the graph induced by $N(I)$ is not an independent set, then there exists a minimum vertex cover in $G$ that includes $N(I)$ and excludes $I$). (This is a 'standard' crown case - I have it implemented already with a separate approach.)

My problem is how to find a structure that would fulfill the suppositions about size as well as having an independent neighborhood? It's all roses when every vertex in $I$ is of the same degree, e.g. ($I$ is yellow, $N(I)$ is green): 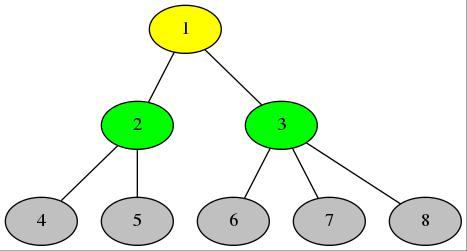 If only that was the case - I'd just check the vertices of a specific degree, descending.

But unfortunately this reduction may apply to a set of vertices of differing degrees. An example:

note the different edges between yellow and green. It also reduces to:

What baffles me is what would the algorithm for that be, since the paper states that given a maximum size $k$ of a vertex cover existing in the graph, it is possible to be done in $O(k^{2}\sqrt{k})$.

Can anybody offer any help or advice or intuition on this?

Not the answer you're looking for? Browse other questions tagged algorithms graphs parameterized-complexity or ask your own question.

1
How does the Vertex Cover algorithm by Chen et al find its tuples?