Is there a simple way of calculating perceptron weights based on a classification graph?

I am studying for an AI exam and I'm looking for a better way of solving the following problem:

Graph shows a classification problem in the unit square $[0,1]^2$, where Class A is denoted by the grey area in the figure (not including the points on the dotted lines), and Class B occurs otherwise. 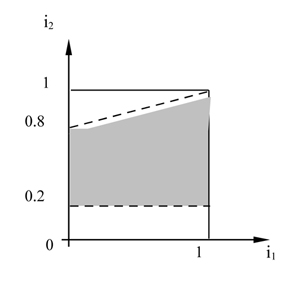 There are 3 ways of finding appropriate weights for inputs and biases that I know of:

All of them are quite time consuming when you do it with just pen and paper.

Is there a simple way of calculating/finding perceptron weights based on a classification graph?

think that you may be somewhat misinterpreting the point of the question. the intent of the exam question seems to be, "what good perceptron weights would result for this classification problem". the reason for this is that one cannot go through all the steps of a long-running algorithm during an exam or even homework.

so going back to perceptron theory [which is several decades old] the point is that its a classifier based on linearly separable functions, ie linear inequalities. for the 2d case this results in simple algebraic geometry. in other words the perceptron can implement some number of linear inequalities to attempt to create the classification. here it is given as $n=2$. so the question probably intended is, "what are two linear inequalities that a good perceptron algorithm would converge to for this problem".

so it seems to reduce to find the coefficients of:

so then use basic geometric algebra to determine the coefficients $m_1, m_2, b_1, b_2$ that work for the above diagram. based on the diagram there is not a perfect solution, but a "good" one. (also note that the equations only need to work within $[0,1]^2$.)

intuitively, its also somewhat implied from this analysis why perceptrons are so limited. because its easy even in 2d to draw classification problems for which there is no linearly separable solution (concave shapes, shapes with holes in them, etcetera— some hint of this is seen in noting the above shape is slightly concave). this observation, fleshed out in a more sophisticated/formal/mathematical/rigorous way in [1], caused a lot of controversy at the time & was an important debate in the history of AI, and even apparently discouraged some scientists from investigating more sophisticated simulated neural network models for some time, although Minsky emphatically denied that was his intent and said his work was misinterpreted.

Not the answer you're looking for? Browse other questions tagged artificial-intelligence neural-networks or ask your own question.

2
How do I “tell” a simple perceptron/adaline neural netrork its output can't be negative?
2
weights in a simple neural network
1
Machine learning algorithm(s) for recognizing simple graph patterns
0
Backpropagation for 'Classification' Neural Network