What are system clock and CPU clock; and what are their functions?

While reading a book, I came across a paragraph given below:

In order to synchronize all of a computer’s operations, a system clock—a small quartz crystal located on the motherboard—is used. The system clock sends out a signal on a regular basis to all other computer components.

Can anyone kindly tell:

The system clock is needed to synchronize all components on the motherboard, which means they all do their work only if the clock is high; never when it's low. And because the clock speed is set above the longest time any signal needs to propagate through any circuit on the board, this system is preventing signals from arriving before other signals are ready and thus keeps everything safe and synchronized. The CPU clock has the same purpose, but is only used on the chip itself. Because the CPU needs to perform more operations per time than the motherboard, the CPU clock is much higher. And because we don't want to have another oscillator (e.g. because they also would need to be synchronized), the CPU just takes the system clock and multiplies it by a number, which is either fixed or unlocked (in that case the user can change the multiplier in order to over- or underclock the CPU).

The answer provided by @Benjoyo is not accurate. The CPU clock can be lower than the system clock, at least in microcontrollers.

Physically, what provides the clock "ticks" to the microcontroller is a crystal oscillator. The oscillator basically has a crystal (X1 in the figure below) that when energized vibrates at a constant frequency. 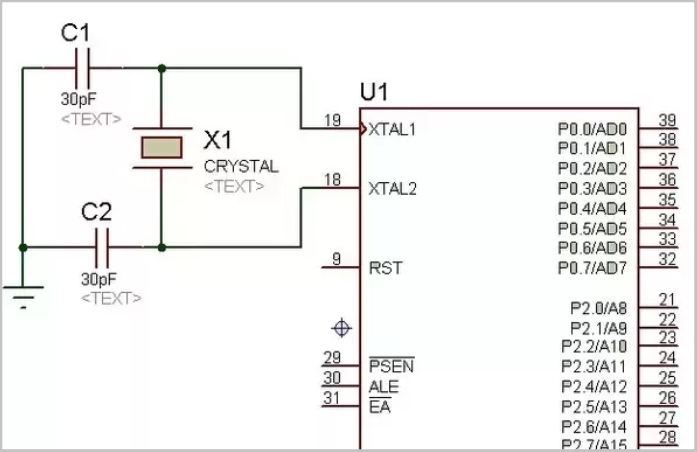 Fosc is the clock eventually with PLL, so with an 8MHz crystal and 4xPLL you would have an Fosc of 32MHz.

On the other hand, the CPU clock $f_{cy}$ is obtained by dividing $f_{osc}$ by 2 as seen in the image below (this depends on the microcontroller).

So a more precise statement would be that the "CPU clock can be much higher than the input crystal oscillator clock (XTFREQ)". Also, depending on the system the CPU clock can actually be lower than the system clock (as mentioned above) or higher [ref].

Not the answer you're looking for? Browse other questions tagged computer-architecture clocks or ask your own question.

0
About Control Unit in CPU and Clock Cycle
3
How is clock syncing implemented?
3
How can I calculate the effective bandwidth of a memory system?
8
Exactly how many clocks does a Computer consists of and how do they synchronize with each other?
2
What information needs to be saved in a Lamport clock system to deduce message causality?
0
How does Lamport imply anomalous behavior is impossible given these constraints?
0
how does the program change the clock speed of the processor?
0
What is the difference between clock cycle and clock period?