Proving the lower bound of compares in comparison based sorting

I'm reading Sedgewick and Wayne's book of Algorithm. When I read the following proof in the attached picture, I don't understand why it assumed the comparison number is lg(number of leaves). Any help is appreciated! 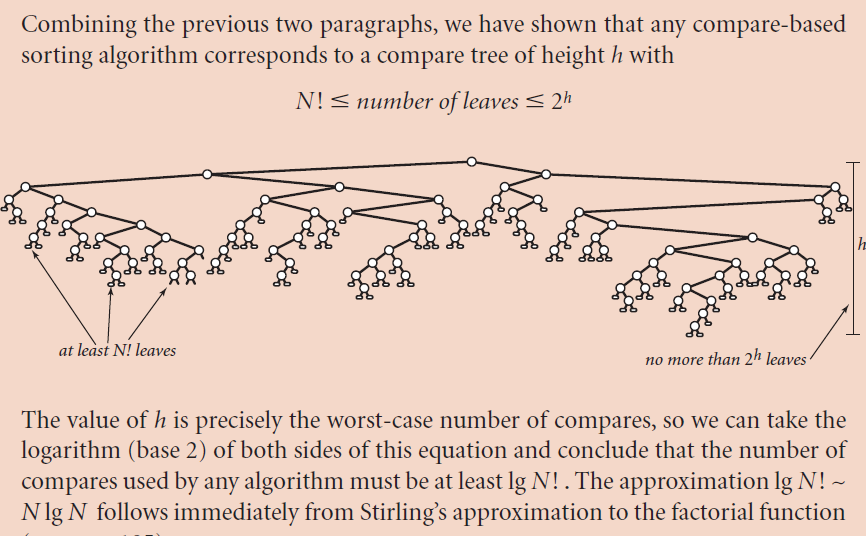 A sorting algorithm using at most $h$ comparisons on all inputs corresponds to a tree of height at most $h$. Such a tree has at most $2^h$ leaves. On the other hand, each permutation of $1,\ldots,N$ must land at a different leaf, and so there must be at least $N!$ leaves. Putting these together, we deduce that $2^h \geq N!$ and so $h \geq \log_2 N! = \Omega(N\log N)$ (using Stirling's approximation). So every sorting algorithm must use at least $\log_2 N! = \Omega(N\log N)$ comparisons in the worst case (on some inputs it can use less).

Relaxing either assumption allows faster sorting algorithms. In practice, these assumptions model the reality well most of the time.

Not the answer you're looking for? Browse other questions tagged algorithms algorithm-analysis runtime-analysis sorting or ask your own question.