Can a petri net fire only one transition at a single moment?

Only one transition being able to fire at a time is known as interleaving semantics. Multiple transitions firing simultaneously is known as step semantics. Some people doing concurrency theory only call the latter real concurrency, and they care deeply about the difference; I'm sure the difference has consequences, but I've worked with Petri nets and I've never run into a situation where it mattered.

In a Petri net editor I used to work on, durations could be assigned to transitions - so these "transitions" represent tasks or processes that take a certain time. Once that is possible, clearly it makes a great difference whether two of them can be firing at the same time or not. But I would say such "timed transitions" really aren't transitions; rather, they are shorthands for a transition (start), a place (executing), and another transition (termination).

How many transitions fire at once depends on the interpretation assigned to the Petri Net.

If you want more than one transition to fire at once, you should consider:

This is fine. A Petri Net can handle this type of firing because the transitions actually fire one at a time. Consider the Petri Net in the following diagram: 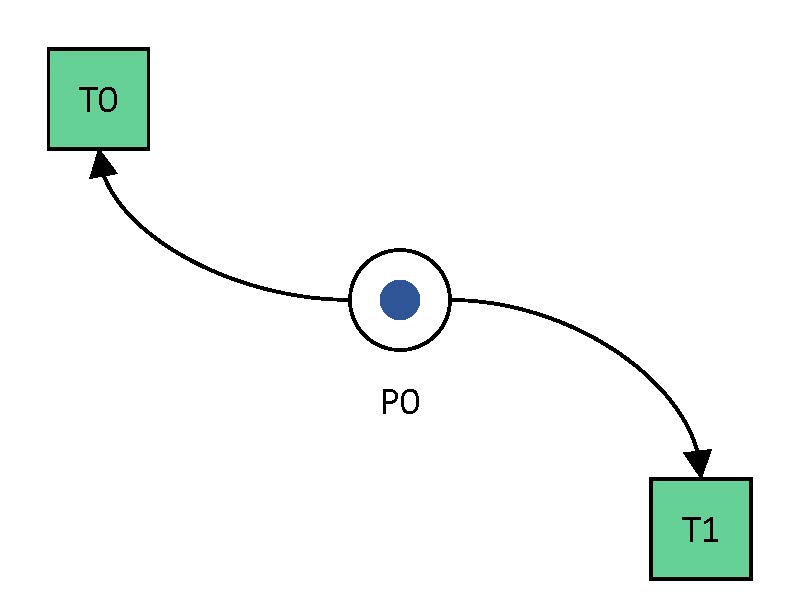 Not the answer you're looking for? Browse other questions tagged computation-models petri-nets or ask your own question.

2
What mathmatical model shall be used for describing P2P processes interaction?
1
Converting reality to Petri net
2
Is a Petri net without places well-defined?
2
Modelling a dependency of multiple transitions on data in one place
0
What the State is, and Where it comes from, when Generating Reachability Graphs
2
Benefit of Petri Net Transition as Separate Object
1
What is the intuition behind a Free-Choice Petri Net?