Want to improve this question? Update the question so it's on-topic for Computer Science Stack Exchange. 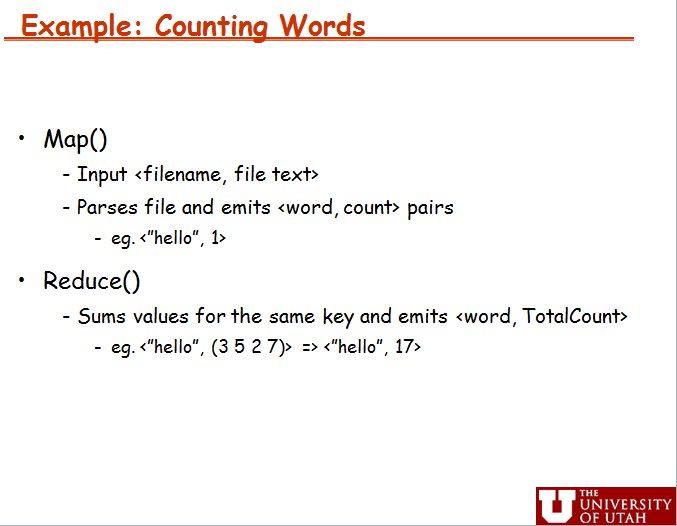 In an example of the application of MapReduce provided by University of Utah, it says that Map() function emits <"hello", 1> every time it sees hello where the reduce function counts the number of instances "hello" occurs

Also, why do you need MapReduce to do this? I can just use an linked list on my computer.

[...] it says that Map() function emits <"hello", 1> every time it sees hello where the reduce function counts the number of instances "hello" occurs

Not quite: It appears the mapper reads each file, counts the number of times a word appears, and outputs a single (word, count) pair per file, rather than per occurrence of the word. The reduce step then sums these. ("hello", 1) indicates that "hello" appeared once in a given file, ("hello", 3) indicates three appearances in a file, etc.

In the example for the reduce step, it appears four files were mapped, and that "hello" appeared 3 times in the first, 5 in the second, etc.

Also, why do you need MapReduce to do this?

Via wiki MapReduce is "for processing parallelizable problems across huge datasets using a large number of computers[.]" Meaning, if your task is to count the number of times "hello" appears in four small documents, you likely don't need MapReduce. But if your task is to count the appearances of all words that appear in a large set of documents, then the only way to accomplish this is a practically useful time may require distributing across multiple processors.

Not the answer you're looking for? Browse other questions tagged algorithms parallel-computing cluster or ask your own question.

4
What is the height of an empty BST when using it in context for balancing?
69
What is the novelty in MapReduce?
6
Problem Solving in MapReduce Framework
1
deadlock caused by a cyle of locks ? unprobable event causing it or just a false intuition
7
motivation and idea of defining non-deterministic Turing machine
1
Runtime of weighted interval scheduling dynamic programming algorithm
1
Counting occurrences of word in a text