† A non conditional variable is defined as a variable that is necessary true or false, e.g. $\implies x$ or $\implies \neg y$.

‡ An empty implication is defined as an implication where one side is empty (e.g. $\implies x \wedge y$) or the other side is necessarily true (e.g. $\mathrm{true} \vee a \implies b$.

To get a more intuitive understanding of the algorithm consider the following set of clauses $L$:

The algorithm will do the following:

3) Reinserting the variables into $L$ will result in the first clauses being violated: $a \wedge b \implies c$. Since $a$ is false, $c$ is false, meaning clause (v) is violated. The algorithm will return "Not Satisfiable"

I am aware that the algorithm appears confusing. Please feel free to ask for clarification.

From comments I now realize that there is no known efficient general satisfiability algorithm. I'm still interested in feedback about my algorithm. Does it work? How does it compare with common algorithms?

NOTE: this is one problem I noticed; there may very well be other problems.

The problem is with the "empty OR implication" split into two algorithms, is that in its current form, the split does not cover all cases. In particular:

You start with $(x \vee c \rightarrow y)$, then $c$ is removed and we are left with an empty OR implication of $(x \vee [] \rightarrow y)$. You suggest now splitting it into two new problems and solving each of them; one with $x=T\wedge y=T$ and one where $y=T$. But this does not cover all cases. What about the case when $x=F\vee y=F$. However, your algorithm never considers the possibility that $y$ is false.

I think you might be able to fix this by formulating the two new problems as one with $y$ and one with $\overline x$.

What happens when you are left with a bunch of clauses in the form:

After reducing everything, these clauses will remain, and you won't be able to test their satisfiability easily.

Supposing the algorithm did work in general, it would run in time of $\Omega(2^m)$ worst case, $m$ being the number of variables. The reason is, each splitting of problem into problems of similar size means that the algorithm runs in exponential time. To visualize this concept, look at the following image of a full binary tree (image from here): 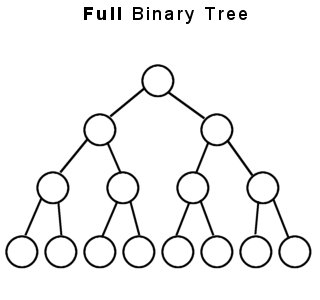 Now imagine the original problem is the node on top. We split the problem into two problems on the second level, but they are of similar size (we only get rid of one variable, $x$ or $y$ from the empty OR implication, so we will still have lots of empty OR implications to do each level). We will potentially have to split the problem $\mathcal{O}(m)$ times to get rid of $m$ variables. This means we will have to deal with a tree with $m$ levels. A tree with $m$ levels has $2^m$ leaf nodes (nodes at the bottom). This is called exponential time, and is informally somewhat on-par with all known boolean satisfiability algorithms. But so is brute force: there are $2^m$ possible assignments of the variables, so by brute force you can guess each assignment and check for satisfiability with similar performance!

Before you feel you have a "new" SAT algorithm, please review the standard/classic backtracking/search algorithm in the literature for the problem dating to ~1962, the Davis–Putnam–Logemann–Loveland algorithm. most backtracking/recursive algorithms for the problem will likely end up looking somewhat similar to this algorithm, although it can take quite a while to demonstrate this equivalence.

Serious analysis would involve benchmarking your algorithm against examples (or random instances) vs DPLL.

And so it is helpful merely to summarize how your algorithm differs from it. without reviewing your code, odds are:

The algorithm can be easily understood by an intelligent undergraduate however it seems rarely taught at the undergraduate level or in undergraduate textbooks, or perhaps not even often referenced, possibly leading to a mistaken view or impression that basic SAT algorithms are not well understood etc.

Also recently just ran across this "live" site called ToughSat by Yuen and Bebel for generating hard instances for use with benchmarking, some based on factoring [one of the classic SAT hard instance generation methods]. there are others eg DIMACs that store archives of hard instances although it may no longer be online.

99
How does one know which notation of time complexity analysis to use?