Some slight confusion with the UNTIL operator in CTL (e.g. a U b)

I've sketched a very small transition system in paint that I'll use as an example.

I want to see if $A(aUb)$ holds for this transition system. From my understanding, this CTL formula is asking if ALL paths satisfy $aUb$. The only path we can take in this example is S0S1S0S1S0S1S0S1...

(2) definitely holds - however it's (1) that I'm unsure about. Am I correct in saying that $aUb$ doesn't hold for (1)? Since we can continue looping over a infinitely without eventually reaching b (and because (1) doesn't satisfy the formula, $A(aUb)$ doesn't hold for this transition system).

Have I understood this correctly? I guess the main confusion for me is that there is 1 path but more than 1 possible output.

Any help is much appreciated.

edit: This is the transition system I'm referring to in the comments below 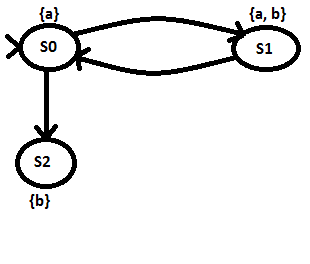 Now, this word satisfies $aUb$, since $a$ holds until the secod letter, in which $b$ holds.

The $\forall$ quantifier here is somewhat useless, since there is a single path.

The second system is problematic, since there is nowhere to go to from $S_2$...

A small addendum to @Shaull's anwswer, which is completely correct: for the output (1), $aaaaaaaaa\ldots$, you suggested (if it were possible in your transition system), your assumption that the formula does not hold is correct. The formula $A [a U b]$ does not hold on such a path; Wikipedia gives the following definition:

In your case, this means that there has to be a state in which the output contains $b$; if there is not, the forumula $A[a U b]$ cannot be satisfied.