Understanding the heuristic used for approximate string searching through an FSA

Explanation of the algorithm (from my understanding anyway):

A word is inputted into the automaton and from each state, a number of possible actions can be taken depending on the current symbol/character being looked at at position $pos$. These "actions" include:

The action is decides to take is based on a cost function $f=g+h$ (where the lowest $f$ is chosen) for each action.

$g = 0$ if no edit operation is performed on the input word (i.e. the transition label taken to a next state, is the same as the current character at pos) and $g=1$ otherwise.

I think I understand the algorithm correctly since I tried to implement it from my understanding in Java (I'm doing it for my project, although my project only handles regular expressions of a small alphabet of around 3 different symbols as opposed to a natural language dictionary) and it seems to work to some extent and works fine for the example given in the paper, however my problem is is that I don't understand what priority is used in the case where $f$ values tie for $f=g+h$ (tied $f$ values are actually common). 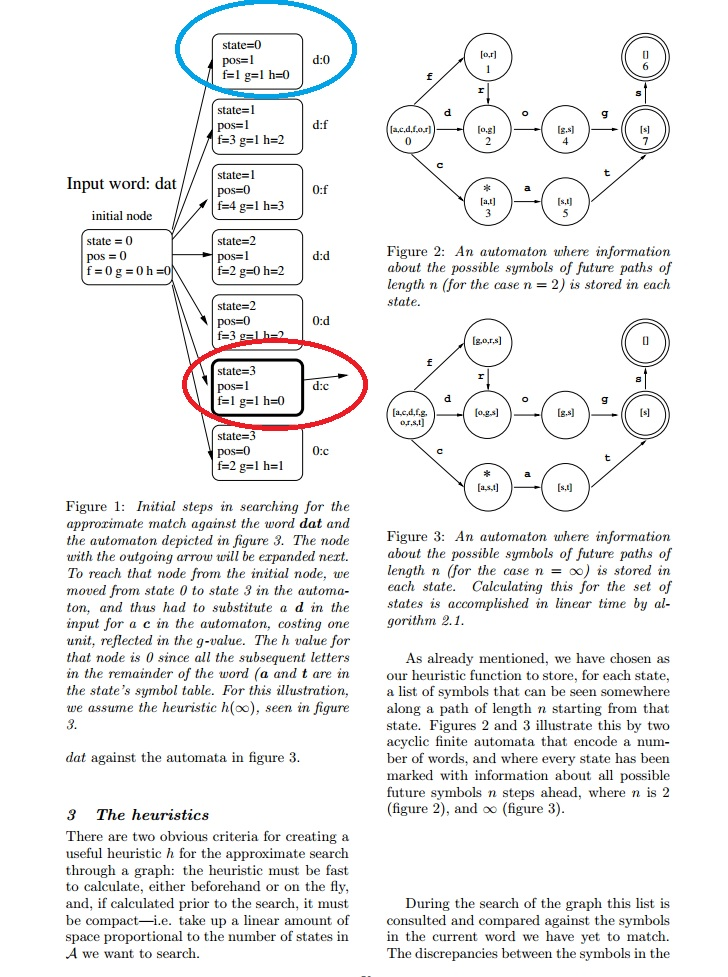 "ties were resolved in the priority queue by giving priority to the highest word position."

but I don't understand what is meant by this.

"In our experiments, the strategy of breaking ties so that the node that has advanced farthest in the word to be matched is given priority has proven to be far superior to any of the tiebreaking strategies we explored."

Those two statements are correlated: "giving priority to the highest word position" is the same as "the node that has advanced farthest in the word is given priority".

To see why this heuristic results in better results, examine the node zero. Deleting 'd' you see all the letters remaining are in the reachable nodes from zero, which means $h = 0$, and we only performed 1 operation, so $f = 1$. However in order to get to the acceptance state along the shortest path we have to take another operation to go to 3 while adding 'c' back, then we transition through the states 5, and 7 making no changes. Obviously the fastest (and shortest) path is to simply swap 'd' to 'c' and transition to state three first, which the heuristic suggests in this case.

Not the answer you're looking for? Browse other questions tagged finite-automata strings edit-distance or ask your own question.

7
Converting an NFA to regex using GNFA algorithm?
1
DFA memory bandwidth
1
Is the empty string ε in regular languages implicitly between any two characters in a string?
0
What is the deterministic finitite automaton (DFA) for the regex ".*b."
4
Do multiple transitions over the input give finite state machines more power?
1
When can a Non-Deterministic Finite Automaton with Epsilon transitions considered to be in an accepted state?
0
new language accepted by FA when new transitions are added to a FA?
3
Efficient algorithm to find a rejecting input of an NFA
1
Showing that for every NFA with n states, there is a regular expression of length $O(2^n)$