When a given weighted directed acyclic graph represents some object flow, what is the most efficient algorithm to find the equivalent graph sum of which edges is minimum? Here, 'equivalent' means the end state of the objects is the same.

The picture below is the trivial example of this problem. 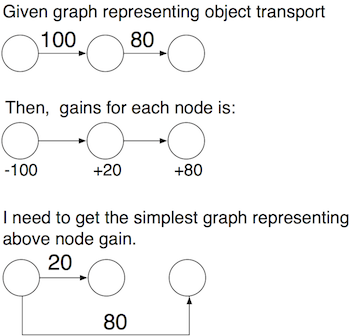 Sorry, my problem specification was ambiguous. I updated the sample problem explanation.

To clarify the specification, I provide mathematical formulation.

Transport mass map T is a map between directed weighted graph to a set of pairs of node and transported volume. 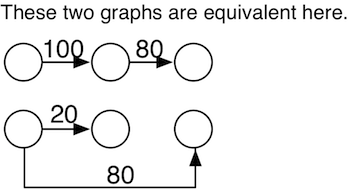 If G1 ~ G2 means G1 is equivalent with G2 in this sense, ~ is equivalence relation in a directed weighted graph set.

What is (the most) efficient method to find G- when G is given.

What is the method above called generally?

Browse other questions tagged algorithms graphs or ask your own question.