What is “potential speedup” in parallel computing?

There is an example problem from p506 of Computer Organization and Design, Fifth Edition: The Hardware/Software interface by David A. Patterson, John L. Hennessy 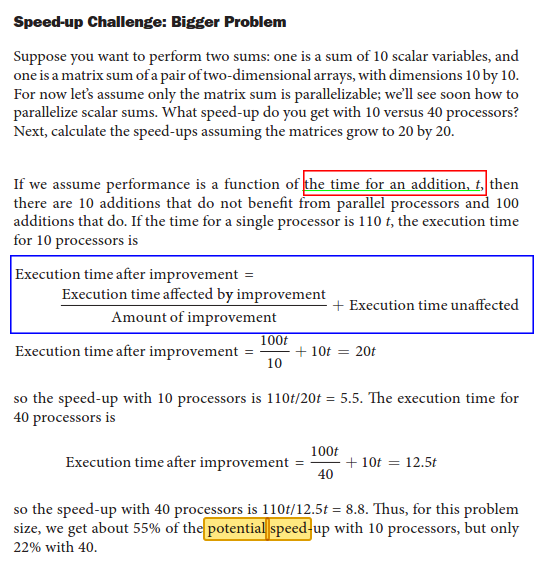 I wonder how "potential speedup" is defined? The book doesn't give its definition.

Since the execution time before improvement has a part $(10t)$ unaffectable by parallel computing on multiple processors, according to Amdahl's law (outlined in blue box), the potential speedup must be smaller than the number of processors.

So I am puzzled.

Google books has an earlier (4th) edition which has a similar example too.

Potential speedup $\equiv$ number of processors. I agree that it is poorly chosen wording. A better term would be efficiency (the average amount of time that the processors are doing useful work.)

Since the execution time before improvement has a part (10t)(10t) unaffectable by parallel computing on multiple processors, according to Amdahl's law (outlined in blue box), the potential speedup must be smaller than the number of processors.

The potential speedup in the article means a number of processors, already answered. It means a speedup limit for a given PC for the case when the algorithm could be cut in parallel pieces unlimited.

For example, an algorithm has N independent parts for N processors. It never occurs in real life, but a theoretically example is - find N random numbers. Here our speedup is N, but the article's algorithm hasn't this property.

The Amdahl's law doesn't interfere directly with the potential speed term. It, in other words, states that when the task split, the summary execution time can't be less than the largest fragment. So, Amdahl's law uses only sequential computation time for program fragments as the statement objects, not a "potential speedup."

Not the answer you're looking for? Browse other questions tagged terminology algorithm-analysis runtime-analysis parallel-computing or ask your own question.