I'm new to linear/integer programming and I'm trying to solve a little problem I made up. I want to "pack" animals into a minimum number of bins where some of the animals cannot co-exist (wolves and sheep). Here is a picture of my little flow network that's guiding me. 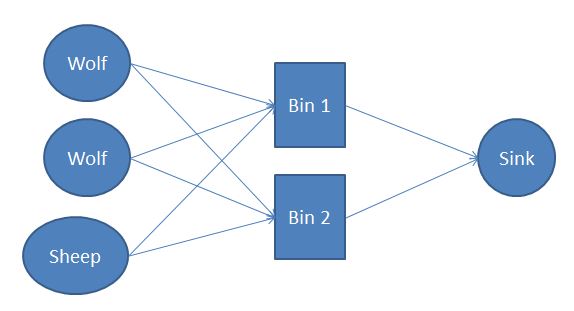 I've figured out how to write constraints that would allow me to minimize the number of bins if there is no distinction in input type.

What I've tried so far is the following. I take two inputs and sum them. I also take the input type and compare them so that I get either a zero or 1. At the final node, multiple the 0 or 1 with the summation and you get either the sum or nothing.

My questions come into play here in the following:

Any suggestions are appreciated.

I would approach it in the following way:

Suppose that I have the following sets:

Suppose I have the following parameters:

And suppose I have the following variable:

So, for example, the following matrix:

Your model would be:

The OBJECTIVE FUNCTION U is the sum of all bins that are actually being used, and it is this sum that you want to minimize. There might be more elegant ways of defining that, but this is what I could think at the moment. Essentially you would count all bins that contain at least one animal - $\sum_A M_{ab_{i}} > 0$ represents that. In GAMS Programming language, I could represent this as what they call a dollar sign condition ($), check the language you are using to see how to impose this condition to the equation.

The FIRST CONSTRAINT indicates that there can be a maximum of 2 animals per bin - it translates to the following equations:

Not the answer you're looking for? Browse other questions tagged optimization integer-programming or ask your own question.

21
How to pack polygons inside another polygon?
0
Integer Programming Traveling Salesman - Checking if Tour is Complete
2
Computing maximum-cost subtree that uses at most k edges
3
Does integer programming $\in$ NP imply $NP=CoNP$?
2
What is the right term/theory for prediction of Binary Variables based upon their continuous value?
0
Distribute repeated values into bins as evenly as possible
1
How to do supervised learning without knowing the target
2
optimizing for loops