What do we know about NP ∩ co-NP and its relation to NPI?

A TA dropped by today to inquire some things about NP and co-NP. We arrived at a point where I was stumped, too: what does a Venn diagram of P, NPI, NP, and co-NP look like assuming P ≠ NP (the other case is boring)?

There seem to be four basic options.

Do we know which is right, or at least which can not be true?

The complexity zoo entries for NPI and NP ∩ co-NP do not inspire much hope that anything is known, but I'm not really fluent enough in complexity theory to comprehend all the other classes (and their impact on this question) floating around there.

The fact that P ≠ NP does not preclude the possibility that NP = co-NP, in which case NP ∩ co-NP = NP. So to further the discussion, let us assume that NP ≠ co-NP. In that case, Corollary 9 in Schöning's A uniform approach to obtain diagonal sets in complexity classes shows that there exists some language in NP – co-NP which is NP-intermediate. So NPI strictly contains (NP ∩ co-NP) - P (note that every language in NP ∩ co-NP is in P ∪ NPI). This is your option (4).

In summary, assuming P ≠ NP and NP ≠ co-NP, we get this: 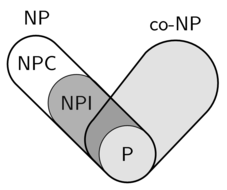 Not the answer you're looking for? Browse other questions tagged complexity-theory reference-request complexity-classes np or ask your own question.

4
What is known about coRL and RL?
6
What is the difference between turing reductions and many-one reductions?
4
What is the relation between NC and P/poly?
5
What do we know about $NP \cap co-NP$?
1
Theory of Complexity - Relation between a class and its complement
0
Relation of P vs. BPP and P vs. NP
1
A question regarding definition of Deterministic Subexponential Time (SUBEXP)