Description and semantics of program graphs

This is the question I'm trying to answer: 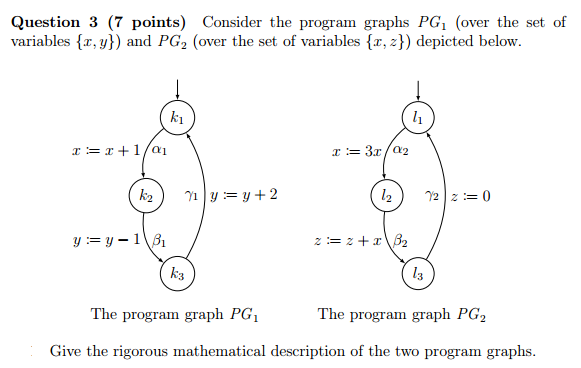 I'm aware that $g_0$ is the starting condition, but I'm not sure what it is in this case? Also for $\rightarrow$ I assumed this was done the same was it is in Transition Systems, if somebody could clarify whether or not this is the correct way to do it I would be really grateful.

Thanks in advance for any help.

From "Principle of Model Checking" By Joost-Pieter Katoen and Christel baier:

It is further noted that:

$Cond(Var)$ is the set of Boolean conditions over Var

Given these definitions, your definitions of $Loc$, $Act$ and $Effect$ are correct

So, according to these definition the conditional transition relation must be:

where each questionmark is a tautology, ie something always true (as there are no conditions in the figure). As the authors note,

So in conclusion your definition of $\rightarrow$ is correct

Furthermore, $Cond(Var)$ must consist of tautologies.

To me it seems that there are no given initial conditions on the variables $x,y$ so $g_0$ must simply be a tautology as $g_0 \in Cond(Var)$. It seems undefined what specific tautology $g_0$ must be, but any tautology will do, if you apply the Structural Operational Semantics given in the book, as any location satisfies any tautology.

Both concepts are defined in the context of Transition Systems.

Executions are alternating sequences consisting of states and actions

For reasoning about executions and traces you thus need to look at the transition system induced from the program graph (by the structural operational semantics given in the book).

Not the answer you're looking for? Browse other questions tagged semantics model-checking software-verification or ask your own question.