I have an object which consist of loosely packed, non-overlapping circles, of radius r.

Part of such an object is seen below, the object consist of the bold blue circles, and it extends further than shown on the figure.

That green curve is what I want to find. 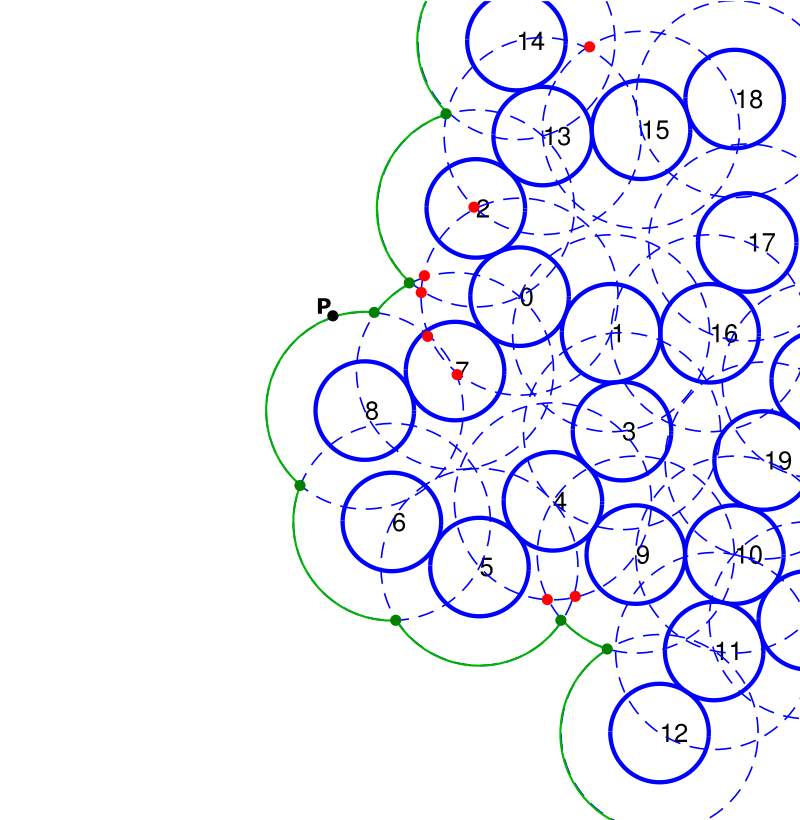 I don't need to find the curve surrounding the whole object, which is very large (10k-10M circles), just part of it. If the green curve is a parametric curve with parameter t, I just need to find it for p < t < q centered on the point P.

The object constantly grows as more circles are added to it, and each time a circle is added I need the green curve centered on the point P, which is the location of the newly added circle.

A complexity of O(n^2), for finding the green curve, where n is the number of circles, would kill the simulation, for which this is needed.

I am hoping to find something which is O(p-q), i.e. linear in the length of arc I want to find.

First of all, most problems with O(n^2) complexity can be reduced to O(1) by utilizing lookup grids, which keep a list of circles currently residing in a given square region.

Maintaining a list of perimeter circles If an ordered list of the circles sitting in the perimeter is kept (i.e. --15-13-2-0-7-8-6-5-9-12-- for the figure) one could from the point P find circle #8, and from circle #8 find the the sequences 7-0-2-13-14 and 6-5-9-12. From these two sequences one could easily compute the parametric curve by calculating the intersections between neighboring circles, and discarding interior intersections. The challenge with this algorithm is to update the perimeter list each time a new circle is added. As an example of the challenge imagine a circle added between #5 and #12, touching one of them. This circle would remove #9 from the perimeter list changing it from -6-5-9-12- to -6-5-P-12-, and this is just a very simple example. The number of cases needing to be covered quickly gets out of hand.

Browse other questions tagged algorithms or ask your own question.

8
What is the name of this logistic variant of TSP?
15
Circle Intersection with Sweep Line Algorithm
4
Encircling randomly distributed points
3
Given a list of points on a sphere find the place for another point such that most space is covered?
1
Placing small circles randomly inside a larger circle, where no two small circles intersect
3
Find smallest enclosing circle
0
How to find the angle of an arc to draw graphic
5
Intersection of O(n) expanding circles with line from the origin