So I was thinking about how garbage collectors work and I thought of an interesting issue. Presumably garbage collectors have to traverse all structures in the same way. They can't know weather they are traversing a linked list or a balanced tree or whatever. They also can't use up too much memory in their search. One possible way, and the only way I can think to traverse ALL structures, might be just to traverse them all recursively the way you would a binary tree. This however would give a stack overflow on a linked list or even just a poorly balanced binary tree. But all the garbage collected languages that I have ever used seem to have no problem dealing with such cases.

In the dragon book it uses a "Unscanned" queue of sorts. Basically rather than traversing the structure recursively it just adds things that need to be marked too a queue and then for each thing not marked at the end it is deleted. But wouldn't this queue get very large?

So, how do garbage collectors traverse arbitrary structures? How does this traversal technique avoid overflow?

In a nutshell: Garbage collectors do not use recursion. They just control tracing by keeping track of essentially two sets (that may combine). The order of tracing and cell processing is irrelevant, which gives considerable implementation freedom to represent the sets. Hence there are many solutions that are actually very cheap in memory usage. This is essential since the GC is called precisely when the heap runs out of memory. Things are a bit different with large virtual memories, as new pages can be easily allocated, and the ennemy is not lack of space, but lack of data locality.

I assume you are considering tracing garbage collectors, not reference counting for which your question does not seem to apply.

The question is focussing on the memory cost of tracing for keeping track of a set: the set $U$ (for untraced) of accessible memory cells that still contain pointers that have not yet been traced. This is only half the memory problem for garbage collection. The GC must also keep track of another set: the set $V$ (for visited) of all cells that have been found to be accessible, so as to reclaim all the other cells at the end of the process. Discussing one and not the other makes limited sense, as they may have similar cost, use similar solutions, and even be combined.

The first thing to note is that all tracing GC follow the same abstract model, based on systematic exploration of the directed graph of cells in memory accessible from the program, where memory cells are vertices and pointers are the directed edges. It uses for that the following sets:

The algorithm starts from some roots pointers that are known to the run-time system (usually pointers in stack allocated memory), and puts all the cells they point in the untraced set $U$ (hence in $V$ too).

The tracing terminates when $U$ is empty. This is bound to happen, since no cell goes through $U$ more than once. At that points, $V=T$, and all cells in $V$ are know to be accessible to the program, thus not reclaimable. The complement $H-V$ of $V$ in the heap determines what cells are unreachable by the mutator program and can be reclaimed by the collector for future allocation to the mutator.

Of couse, details vary depending on how sets are implemented, and on whether it is $V$ and $U$, or $U$ and $T$, which are effectively represented.

I also skip details about what is a cell, whether they come in one size or many, how we find pointers in them, how they may be compacted, and a host of other technical issues which you can find in books and surveys on garbage collection.

You may have notice that this is an extremely simple algorithm. There is no recursion, but only a loop on the elements of the set $U$ that can grow as it is being processed, until it eventually empties. No a priori assumption about extra memory. Whatever allows identifying the sets, and doing cheaply enough the needed operations will do. Note that the order in which cells are processed is irrelevant (no specific need for a pushdown stack), which gives a lot of freedom for choosing the means to represent the sets efficiently.

Where known implementations differ is in the way these sets are actually represented. Many techniques have been actually used:

As said, all of the above have been used by some implemented garbage collector, strange as some may seem. It all depends on the various constraints of the implementation. And they can be rather cheap in memory usage, possibly helped by processing order policies that can be freely chosen for that purpose, since they do not matter for the end result.

What may seem the strangest one, transfering cells in a new area, is actually very common: it is called copy collection. It is mostly used with virtual memory.

Clearly there is no recursion, and the mutator algorithm stack does not have to be used.

Another important point is that many modern GC are implemented for large virtual memories. Then getting space to implement and extra list or stack is not an issue as new pages can be easily allocated. However, in large virtual memories, the ennemy is not lack of space but lack of locality. Then, the structure representing the sets, and their use, must be geared towards preserving the locality of data structure and of GC execution. The problem is not space but time. Inadequate implementations are more likely to show unacceptable slowdown than memory overflow.

I did not give references to the many specific algorithms, resulting from various combinations of these techniques, as this seems long enough.

An unscanned queue is a common choice. The queue can get large — potentially as large as the deepest data structure. The queue is typically stored explicitly, not on the stack of the garbage collection thread.

Once all but one of the children of a node have been scanned, the node can be removed from the unscanned queue. This is basically a tail call optimization. Garbage collectors can include heuristics to attempt to scan the deepest child of a node last; for example a GC for Lisp should scan the car of a cons before the cdr.

One way to avoid keeping an unscanned queue is to modify pointers in place, making the child temporarily point to the parent. This is a constant-memory tree traversal technique that's used in contexts other than garbage collectors. The downside of this technique is that while the GC is traversing a data structure, the data structure is invalid, so the GC has to stop the world. This isn't a deal breaker: many garbage collectors do include a phase that stops the world, in addition to phases that don't but can miss garbage as a result.

The standard way to avoid a stack overflow is to use an explicit stack (stored as a data structure in the heap). That works for these purposes too. Garbage collectors often have a worklist of items that need to be examined/traversed, which serves this role. For instance, your "Unscanned" queue is an example of exactly this sort of pattern. The queue can potentially get large, but it doesn't cause a stack overflow, because it is not stored in the stack segment. In any case it will never get larger than the number of live objects in the heap.

Copying garbage collectors use what is often called Cheyney's algorithm to perform a queue traversal without needing extra space. This algorithm was introduced in C.J. Cheyney, "A Nonrecursive List Compacting Algorithm", Comm. ACM, 13(11):677-678, 1970.

In a copying garbage collector you have a chunk of memory that you are trying to collect, called the from-space, and a chunk of memory that you are using for the copies called the to-space. The to-space is organized as a queue with a scan pointer pointing to the oldest copied-but-unscanned record, and a free pointer pointing to the next free position in to-space. The picture of this from Wilson's paper is: 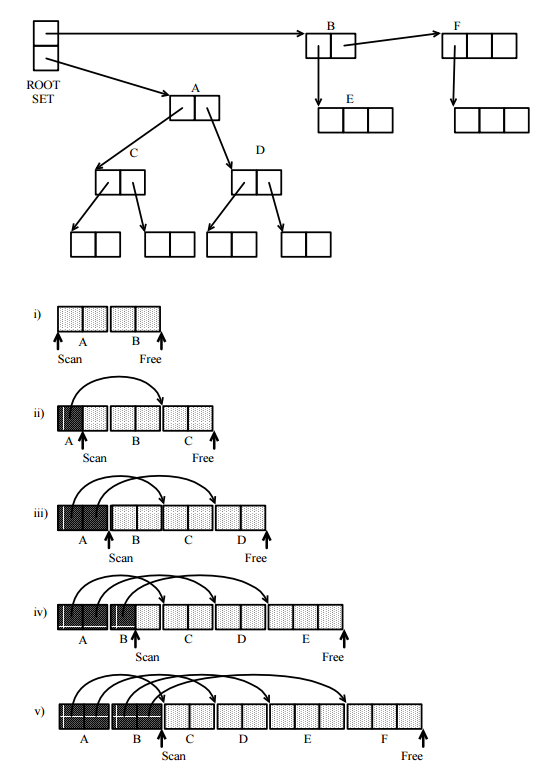 Not the answer you're looking for? Browse other questions tagged programming-languages memory-management garbage-collection or ask your own question.