Covering a graph with non-overlapping cliques

I have a problem where I need to split a graph into subgraphs. The conditions for the splitting is as follows:

Below is an obvious example. Multiple maximal cliques exists, but it is very clear to the beholder which two should constitute the subgraphs. 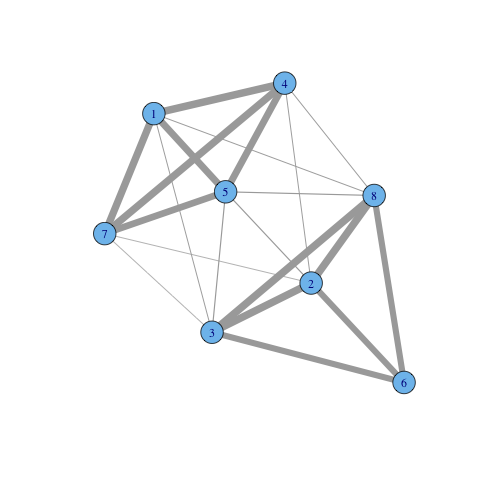 My main approach now is thus to find all maximal cliques, and then somehow remove unwanted cliques based on edge weights but I'm at a loss as to what the best approach for the latter part is...

Edit: This is my current implementation

This is sort of similar to @kurtosis answer but handles edge weights as well as the case where vertices are left out of the initial iteration.

Edit 2: To clarify what I'm asking (because it might be less obvious after the first edit). My problem remains as described in the first part. After posing the question I've developed a solution as described in the first edit, that seems to get the job done, but it is, in my view, not very elegant. It might be the only way to solve the given problem, but I wouldn't know as graph theory is not my main area. Thus I'm still curious if there are other more efficient approaches to solving the problem.

Thus I'm still curious if there are other more efficient approaches to solving the problem.

If you take the complement graph $\overline{G}$, then your problem corresponds to a coloring problem. Cover by cliques in $G$ is the same as covering by independent set in $\overline{G}$.

There is an algorithm computing the chromatic number in time $O^*(2^n)$ using exponential space, and in time $O(2.2461^n)$ using polynomial space.

Try out classical Bron-Kerbosch algorithm. It finds all maximal cliques in a graph and is implemented, for example, in well-known python library networkx: http://networkx.lanl.gov/reference/generated/networkx.algorithms.clique.find_cliques.html

Nevertheless, the cliques still can be overlapping, so the problem of finding the optimal non-overlapping clique set is open. I'm not aware of latest proceedings in the research on this topic. But you can concoct and apply some simple greedy heuristics, like this:

Not the answer you're looking for? Browse other questions tagged graphs weighted-graphs clique or ask your own question.

0
Cliques in an alternate graph representation
5
Dividing a weighted planar graph into $k$ subgraphs with balanced weight
6
Expected number of maximal cliques in $G(n,p)$
3
Densely connected non overlapping subgraph
3
Implementing Nesetril and Poljak's clique detection algorithm
3
Fewest induced subgraphs of order <= k which cover every edge
0
Colored cliques complexity
0
What is the complexity of k-clique problem with a predetermined vertex in the solution?