Why is $X_m$ and $Y_m$ not included in the shaded region(where median can lie)?

This problem is from Algorithms, problem 2

My question is regarding the case where median($X$) is less than the median($Y$).

Here is the proof that the authors(gave) that any element in $X$ less than median($X$) cannot be the median of the two lists.

Because of 1 and 2, the median cannot be any element in $A$ that is less than median($A$)

I agree with every step in the proof and with that statement. However, here is the diagram of possibilities where the median of the two lists can be 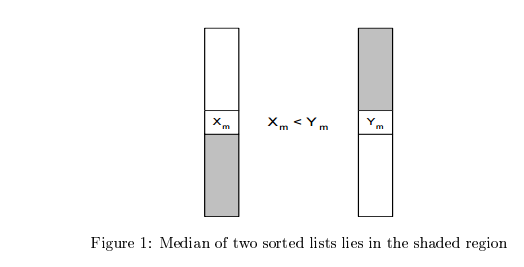 Based off that proof, I understand why all the elements below the median of $A$ and in $A$ cannot be the median of the two lists. But what justification did author use to eliminate median($X$) as a possibility? It wasn't included in the shaded region.

I think the caption of Figure 1 is wrong: median of two sorted lists lies in the unshaded region.

Not the answer you're looking for? Browse other questions tagged algorithms recursion divide-and-conquer or ask your own question.

14
Randomized Selection
7
Efficient algorithm for this optimization problem? Dynamic programming?
0
Given an array of n unsorted integers, how can you check that any 2 elements within k distance of some element don't vary by a multiple of 2?
3
Hint on median of two sorted lists, logarithmic time
5
Reservoir sampling algorithm probability
1
Online set filling with redistributions
0
Running time of median of 3 partioning