Converting a NFA to its equivalent regular expression

I have the following NFA:

I'm using the state elimination method to obtain the regular expression for the NFA. So I first introduced two new states, $q_{start}$ (the new start state of the NFA) and $q_{end}$ (the new and only accepting state of the NFA). After that, I eliminated the states one after the other. 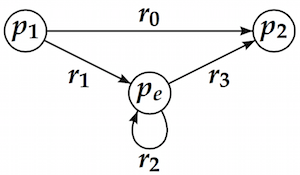 I already eliminated states $q_0$ and $q_1$, but I have no idea how to eliminate state $q_4$, since it has no outgoing transitions except to itself. Could you please help me out with that?

formal-languages automata regular-expressions
Share
Improve this question
asked May 12, 2015 at 16:42

Technically it can be reduced, by introducing a regular expression for the empty set, which represents the missing edge.

However, $q_4$ is completely useless for the language. They can be dropped without changing the accepted language. That should save some work.

Not the answer you're looking for? Browse other questions tagged formal-languages automata regular-expressions or ask your own question.