What is the difference between "strict schedule" and "cascadeless schedule"?

In database transactions theory, what is the difference between a strict schedule and a schedule that is merely secured against cascade aborts?

Could you give an example of a schedule that is secured against cascade aborts but is not strict?

I found these slides that give definitions but it's still not clear to me where is the difference (they just seem differently worded).

If you read carefully, the definition of strict says "not read or overwritten". That's the difference.

I reproduce here an example of cascadeless but not strict schedule, from the Wikipedia page on the subject: 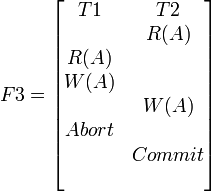 Definitions from the books by Korth et. al. and Elmasri et al.:

Strict schedule
If in the given schedule, each transaction Tj neither reads nor writes any data item ‘x’ until the last transaction Ti that has written ‘X’ is committed or aborted then it is strict.

Thus following schedule is allowed under cascadelessness definition but not under definition of strict schedule:

as write(x) of T1 appears before commit of T2. Evidently cascadeless schedule can contain blind writes !!!

Lets say T1 and T2 are two transactions. T1 is scheduled first and T2 next. Assume they gonna read a variable a

Now lets see how it works. 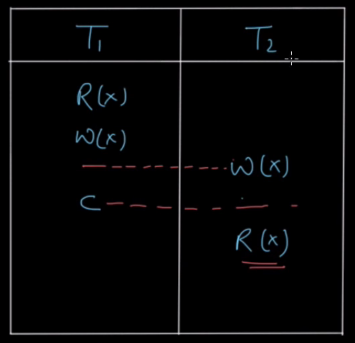 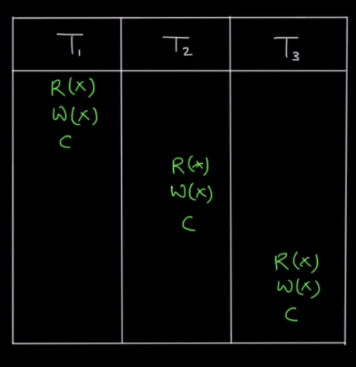 Strict schedule: T2 can read and write a only after commit action from T1. 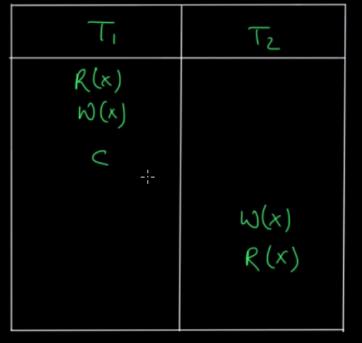 Not the answer you're looking for? Browse other questions tagged database-theory or ask your own question.

3
What is the difference between Transitive Closure and Join?
3
What is the difference between Strict 2Phase Locking and 2Phase Locking?
7
A relational algebra extended to model the full DML ("CRUD") domain
1
Difference between conflict serializability and view serializability
1
How to find highest normal form of a relation, given its functional dependencies
0
Figuring out the equivalence between two definitions of "transitive functional dependencies" and intuition behind the intended meaning of definition
0
What are other alternatives to version control on structured or large and highly volatile data?