Who converts binary/machine code to electrical signals and how?

Ask Question
Asked 5 years, 8 months ago
Active yesterday
Viewed 8k times
6
$\begingroup$
The bounty expires in 6 days. Answers to this question are eligible for a +100 reputation bounty. Shashank V M is looking for a canonical answer.

I went through lots of blogs and posts but could not exactly figure out how the machine code is converted to electrical signals?

Any software program is compiled to machine code which is nothing but lots of 1s and 0s. 1 means high voltage e.g 5V and 0 means comparatively low voltage e.g. 0V or ground, what's the component which understands that okay I got 1(one) so I need to step up up the voltage to 5V and for 0(zero) I need to step down to lower voltage level and how it does that?

In old computer you actually had a row of switches on the front panel that would allow entering 1s and 0s directly by hand in the registers of the machines. But this is no longer done.

You never have 1s and 0s, unless you ask the machine to print its internal information as a sequence of 1s and 0s. All information is already in the machine encoded as voltage, or magnetic orientation, or hole in a physical substrate, or some other physical form. Various devices can perform the translation between these form: magnetic heads, laser beams, electro-mechanical devices, electronic circuits,etc.

In general, binary/machine code is no longer entered by human beings, but produced by a program (usually a compiler) by the computer itself, or by another computer and then imported on some memory support or by network. However, human beings can ask to have it printed as 1s and 0s to check what the computer is using or producing. However this requires transforming the single bit 0 or 1 in the computer as a stream of bits to be interpreted by the printer as a request to print an actual drawing (on screen or paper) od the symbol representing a 0 or a 1.

It is hard to give more details without your being more specific regarding the source form and target form of the conversion. But it is most often from binary to binary, with a different physical representation.

Some answers mentioned the input process from keyboard, but that does not really answer the question. I think if anybody who can explain step by step the execution process of an .exe file on a Windows computer will be able to provide more valuable details.

See this answer on SuperUser for a more detailed answer

I’m afraid you are looking at things from the wrong level. There’s a highest level that we usually look at here: Algorithm design. Next level: High level programming languages. Below that: Assembly languages and machine code. Below: Processors. Below that: Logic design. Building things from and/or/nand gates. Out Next level: Transistors. And that’s where actual electricity comes in; voltages, currents, capacitors etc.

There is nothing to convert, the moment you press a key your keyboard sends a signal containing the information about the pressed key (imagine a switch being turned on for the duration of the keypress, this is interpreted by a microchip), this information is already voltage and the cpu or other components work with that. So the only points where such a conversion is necessary are IO devices, if the device in question sends analog data this would be done by an AD Converter.

Maybe you are reffering to the state transion 1->0 or 0->1 itself ? Well, at the lowest level this is done with transistors, for example in NMOS logic you could build a NOR gate like this: 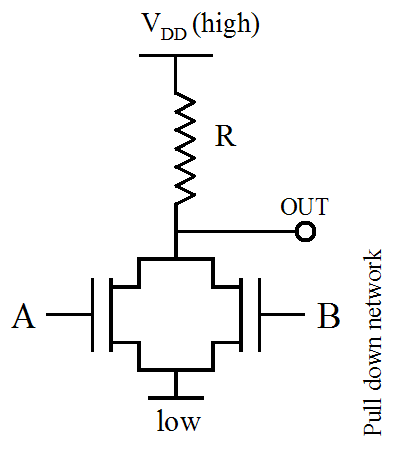 see NMOS, CMOS, MOSFET if you want to know more about it.

The text / code you are looking at on your display right now is a view of the underlying voltages residing on Memory ; therefore, if it’s not a voltage on memory, it’s never on screen.

Text/code is a view of voltages

Actually voltage signals work with themselves in voltage layer(involve cpu,memory,input,output,...) ,and we can see the meaning of voltages signals in binary codes or c code or other language at pc monitor.

Not the answer you're looking for? Browse other questions tagged computer-architecture memory-hardware or ask your own question.

1
How is a program stored before compiling?

3
How are the control signals derived in the MIPS pipeline?
50
If the speed of electrical charge hasn't changed, how have computers become faster?
1
Relation between Machine code and Von Neumann architecture
0
how one memory can be accessed simultaneously in instruction fetch and data read?
5
What are “state registers” and “code registers”?
21
What does machine code actually look like while being run?
2
Is all data stored in computers stored as machine code?
1
Must a Turing machine tape be binary?