I generate some simple graphs based on usage stats of a website, and they may look like these: 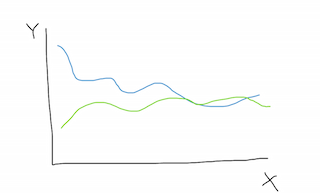 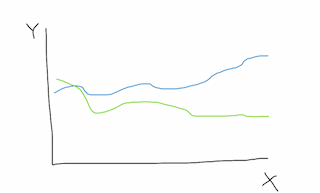 Of course, the curves may neither converge nor diverge. An extreme case of such case is they may evolve more or less parallel to each other.

My problem is to recognize the convergence and the divergence patterns. This may be trivial as done visually by human, but I want to automate the task using an algorithm, and likely a ML algorithm. "Pattern recognition' comes to mind as a (broad) area relating to this kind of problem.

I have some very high-level idea about a possible approach: first manually label some existing graphs as 'convergence', 'divergence', or 'other', and then use a set of these categorized graphs/images to 'train' the ML algorithm in the hope that the algorithm can recognize the patterns on its own after proper training.

My specific questions are:

I suspect machine learning is the wrong approach. Instead, I suspect you will do better to define a metric and measure the metric, or define a hypothesis and use hypothesis testing. You are not trying to predict the future evolution of these values; that's something that ML might be suitable for, but that's not what you're trying to do, so ML doesn't seem like the right tool for the job.

Let me suggest an approach. If $f(t),g(t)$ are the values of the measurements at time $t$, define $D(t) = |f(t)-g(t)|$ (the absolute value of the difference). $D(t)$ measures how close they are. Then, you want to test whether $D(t)$ is increasing or decreasing. If $D(t)$ is decreasing, then you have a situation of "convergence"; if $D(t)$ is increasing, then you have a situation of "divergence".

How can you test whether $D(t)$ is increasing vs decreasing, over some time period? Here's one simple approach. You could separate your time window into two halves, the first half and the second half. Calculate the average value of $D(t)$ over the first half, say $\mu_0$, and the average value of $D(t)$ over the second half, say $\mu_1$. Now you can compare $\mu_0$ to $\mu_1$, to determine whether it is increasing or decreasing.

Alternatively, another approach would be to use simple linear regression on $D(t)$ to fit a linear model $D(t) \sim \alpha t + \beta$, and then test whether the slope $\alpha$ is greater than zero or smaller than zero.

There's lots more one can say about hypothesis testing, but this should give you the general approach. The short version is: don't use machine learning; using an appropriately chosen statistical measure or statistical hypothesis test.

I think the key is to abstract your problem by finding appropriate features. For example a feature could be the minimal distance between the two curves. Or how many times do they cross over. Or how many steps do they stay less than K units away from each other. Think about features that will capture convergence and divergence. Once you have the right features you can throw them into your favourite machine learning algorithm like a Support Vector Machine, Neural Network or Decision Tree. I would give the learning algorithm a set of numbers, because it will make the learning much easier than giving it the whole image.

Not the answer you're looking for? Browse other questions tagged machine-learning artificial-intelligence pattern-recognition hidden-markov-models or ask your own question.